Many of us have likely felt sick after staring at the computer screen for too long, but what about headaches? And how does computer use affect people who may already be sensitive, such as a patient who has been diagnosed with chronic migraine or post-concussion syndrome? We take a look at the factors that may contribute to a common phenomenon that is often referred to as computer screen headache.

How common are headaches from computer screens?

It is likely that we all have dealt with the following scenario at one time or another: 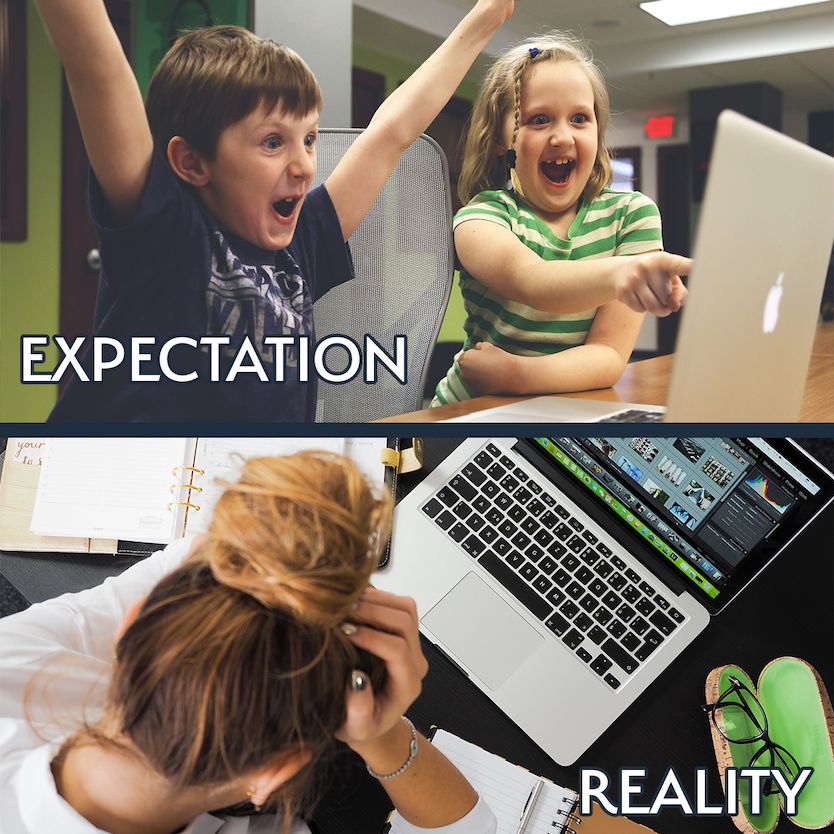 The unfortunately truth is that headaches or migraine attacks from the computer screen are a common occurrence, but researchers have had a difficult time pinpointing just how widespread it is for the general population. Most often it is linked to computer vision syndrome, or CVS for short, which specifically refers to visual and other symptoms that result from screen exposure and which may affect as many as 90% of computer users.2

Among those with CVS symptoms, headache is frequently cited as the most prevalent—even though, ironically, it is not directly related to the eye. Researchers from across the globe have found that between 19% to 53% of those with extended exposure to their PC or laptop screen suffer headaches as a frequent side effect; in many cases, recurring headache symptoms lasted a week or more.1,4,10 Workers who specifically use the computer as a primary function of their job have also been found to have more headache episodes, although just a few hours of constant use for an extended time period can have the same effect.1,3

Computer screen time can have serious consequences for a person with migraine, especially if light is a trigger and/or if photophobia is otherwise a prominent symptom. Early studies have suggested that computer screens may worsen migraine or headache-related symptoms in one-third of patients; researchers also discovered that it may lead to attacks in 14 percent of migraineurs.5 Anecdotal evidence however suggests these numbers may be especially low. Our survey of light-sensitive individuals last year revealed that 85% believed LED and LCD screens played a significant role in the frequency and severity of their attacks.

Children and adolescents may be even more susceptible to migraine attacks from computer screen exposure. Numerous studies have revealed that digital screens and computers are risk factors for the onset of migraine attacks in younger persons.6-8 In fact, nearly half of school-aged children experienced migraines in direct response to computer activity—making it the most common environmental trigger.6

Why are screens bad for concussions and brain injuries?

There is far less clinical evidence available that notes the impact computer screens have on post-concussion syndrome and traumatic brain injury (TBI), but patients are vocal about the negative effects that too much screen exposure can have on their symptoms. For example, nearly all of the post-concussion and TBI respondents (98%) of our survey acknowledged that digital screens were particularly bothersome. And there are countless anecdotes online that further reinforce the health concern of computer usage after a concussion or brain injury:

In addition, LCD screens were shown to slow the recovery time for post-concussive individuals. Certain treatments (specifically neurofeedback) that involve computer use may even be rendered less effective in halting headache symptoms due to the mandatory screen exposure.9 As a result, medical professionals often recommend a period of physical and cognitive rest immediately after a concussion—this often involves limiting screen time from electronic devices and computers. And if post-concussion headaches persist, then longer-term solutions must be identified in order to safely work on a computer.

In addition to these underlying condition, there may be other risk factors to watch out for if computers bring on regular headaches:

Why do computer screens worsen headaches?

There are multiple reasons why your computer screen might be giving you headaches or migraine attacks. Some of the most common include: 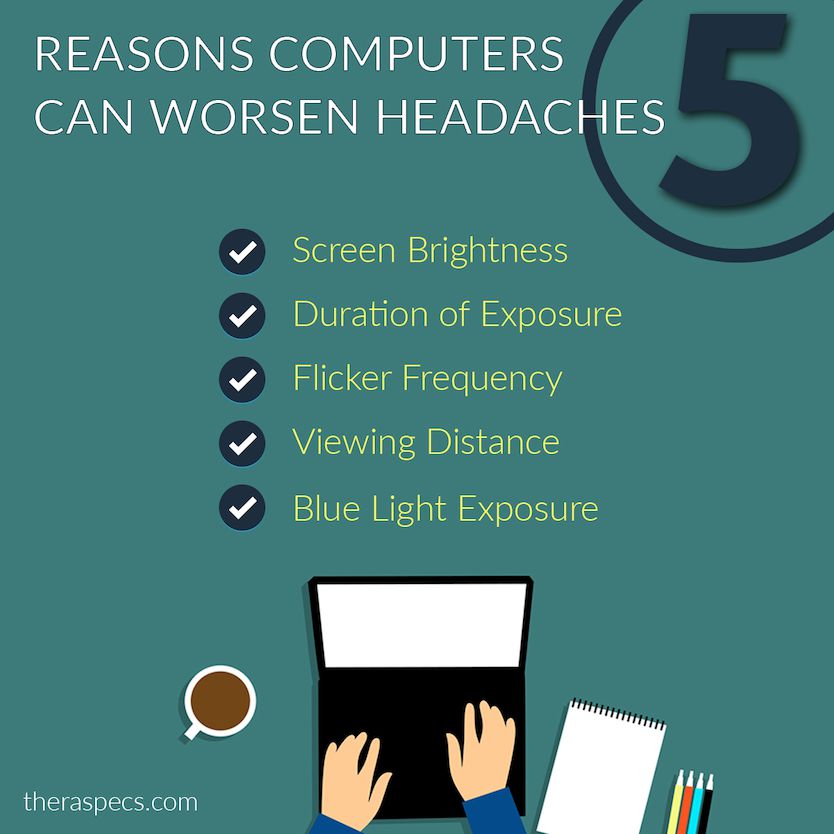 Brightness: Although bright light may not always directly correlate with headaches in the general population, the intensity of the light as well as light/dark contrast are both frequent migraine triggers. And people with existing neurologic deficits are more likely to have a lower tolerance for bright light as well.

Duration of exposure: There can be both a short term and cumulative effect regarding the duration of exposure to computer screens. Intensive viewing for as little as 30 minutes (or even less) may bring on computer vision syndrome symptoms (including headaches). Continuous computer usage—just two hours a day—can also lead to regular head pain.1,10 And extended daily exposure (between 4 to 9 hours) can compound the problem.3,12

Flicker frequency: Abnormal flickering from digital screens may be a culprit in exacerbating headaches.11 This is consistent with prior research that screens backlit by a fluorescent LED bulbs also give off an invisible flicker which can cause similar problems.

Viewing distance: There is conflicting evidence about whether the distance from which you view your computer affects headaches, but it is frequently recommended as an option for reducing their onset.

Blue light: Certain colors of light can be a primary catalyst for headache and migraine attacks, specifically along the blue spectrum. Most visible light falls into this category, making it hard to escape, including when working on the computer. In addition, blue light is also believed to impact sleep patterns and other biological processes.

Are there remedies for computer screen headaches and migraines?

There is no perfect solution for minimizing your headaches and migraine attacks due to computer screens. It often requires a mix of behavioral changes and products that are designed to reduce the harmful effects of constant exposure. Here are a few recommendations that we can provide: