Strength. Courage. Bravery. These are three words that sum up the journey that young Michael has embarked upon since he was born.

From the beginning, Michael has lived with a lifelong neurological brain-gut condition called cyclic vomiting syndrome (CVS). It presents with episodes of at-times incapacitating nausea and vomiting that can last from a few hours to even days; for Michael, it has been further complicated by the co-morbid occurrence of regular migraine attacks and irritable bowel syndrome (IBS). If that were not enough, there are numerous triggers, symptoms and side effects that also make it an ongoing challenge.

"As you can imagine, vomiting (or feeling like you will) on a regular basis is tough for anyone one of us as adults, let alone for a young child," his mother Janet explains. "Along with this, he experiences light and sound sensitivities, pain, and chronic fatigue, just to mention a few."

A few years ago, Michael’s medical needs became even more acute after enduring a trauma at school that left him with psychogenic non-epileptic seizures (PNES) and post-traumatic stress disorder (PTSD)—both of which are affected by extreme levels of anxiety and psychological stress. At the peak of these episodes, he would collapse with an inability to move or control his body for extended periods of time. According to Janet, the worst experience lasted 36 hours, where he was unable to hold himself up for everyday functions.

The neurological issues were equally dramatic. From severe head pain with or without aura to hallucinations, seizure-like tremors and cognitive issues, they changed constantly. Light sensitivity was just one of the many concerns they needed to address.

On that front, Michael wore hats and also hung murals and other artwork over windows to shield himself from bright light. Then a physician recommended looking into TheraSpecs as another option to reduce his photophobia symptoms and cut down on light-related triggers. True to form, Janet took up the task of researching our glasses and reaching out to our team.

"I would never have made the plunge to try had I not called and been extended the time and courtesy that Kathy at TheraSpecs provided me!" she said. "We own both the inside and outside [wraparound] pairs. My son puts these on first thing in the morning and doesn't remove them until it is time for bed." 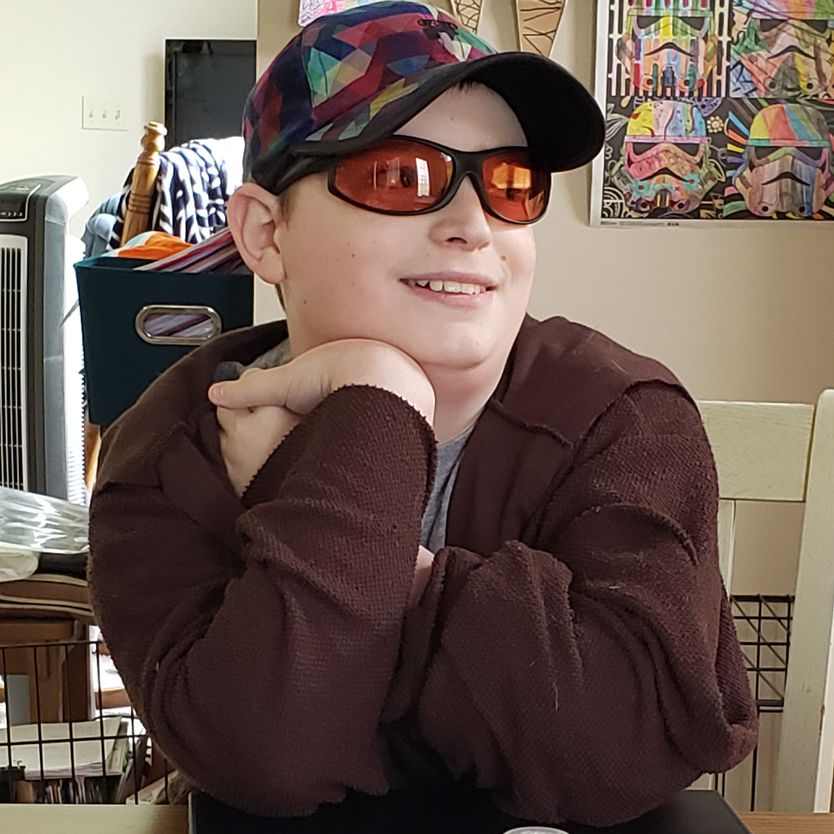 Michael enjoys wearing his indoor Wrap TheraSpecs for the way they calm the harshness of bright lighting and provide extra protection for light.

Although his school participation continues to evolve and change, Michael remains surrounded by a team of amazing supporters, family members, educational and medical professionals. His mother in particular remains a rock in his life with her constant communication with all the appropriate people and her tireless efforts to give Michael what he requires. And with additional tools like TheraSpecs and other accommodations for his physical and emotional needs, Michael one day hopes to return to school full time to once again be among his friends and teachers.

"I see myself going to the high school, maybe not next year, but maybe starting to little by little," Michael said in a video produced by the family. "Maybe not full time right away, but little by little, and work my way up. Baby steps..."

He even has his sights set on becoming a dentist because of his constant desire to help people—a trait that his family and others noticed right away and which continues to inspire everybody on "Team Michael."

"Michael has one of the highest self-moral codes according to the therapists he works with," Janet said. "He shows amazing strength and bravery every day, because I have to tell you, if I physically felt like Michael feels on a day to day basis, I'd say to heck with it all. Not Michael—he puts his best foot forward every day."

And her lesson, the one that Michael himself reinforces with his relentlessly positive attitude, is one that we all can take away:

"At the end of each day, we remind ourselves that tomorrow starts a brand-new day, with brand new challenges. Together we can weather any storm that comes our way ... sometimes it is one day at a time, one hour at a time, one foot at a time, one minute at a time with a lot of deep breathing along the way. It continues to be a trial and error and learning experience, but we always remember our why: It is #TeamMichael."

We would like to extend our gratitude to Janet for sharing Michael’s story so openly and bringing awareness to these conditions. We also greatly appreciate her advocacy for TheraSpecs as well as for others with light sensitivity and chronic illness. You are both an inspiration!