There are different medical classifications related to traumatic brain injuries (TBI); mild TBI (also known as concussion) is the most common and can develop into post-concussion syndrome if symptoms persist. However, a brain injury can also be considered moderate or severe; these types of injuries have their own set of complications. In this post, we explore these physical, cognitive and emotional symptoms associated with a more serious TBI. 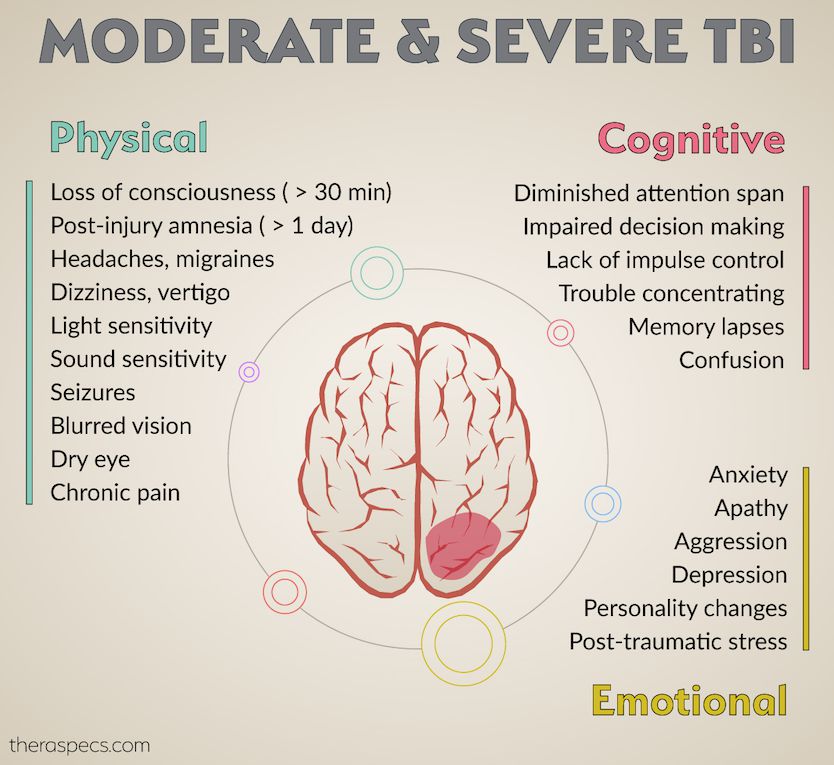 There are several initial signs that may indicate a possible serious brain injury. These include loss of consciousness, post-injury or post-traumatic amnesia and memory lapse, and abnormal brain imaging. Doctors grade the severity of the TBI based on the length of time that these symptoms persist.

For more critical brain injuries, patients are likely to experience a multitude of symptoms. They can manifest within a few minutes or hours of the injury or come on days or weeks later. The most common issues include (click on each below to read more):

We explore each of these in depth below.

Post-traumatic headaches and migraine attacks represent some of the most common complaints after a serious head injury. Although evidence has suggested that there is no additional risk for headache-related symptoms based on severity of the TBI, between 40-50% of all TBI survivors will have these issues at various times within the first year.2 It does however increase significantly with a prior history of headache disorders. Unfortunately, even among the majority of those who make a “good” recovery, the likelihood of headache and migraine symptoms remains high.3

More than half of moderate and severe brain injuries are accompanied by vertigo and/or dizziness. And how long might it last? Unfortunately, dizziness symptoms—such as lightheadedness and imbalance—may be present five years after the initial injury for as many as 37% of moderate TBI survivors and 26% of severe TBI patients. Perhaps more than any other symptom, dizziness and vertigo has been independently linked to other poor recovery and disability outcomes.4-6

Photophobia, or painful light sensitivity, stemming from a serious injury to the brain has mostly been studied in military populations, but they offer some revealing insight. TBIs rated as moderate or severe can lead to light sensitivity in approximately 40% of patients; that number may be as high as 70% among those who only experience a loss of consciousness (a hallmark sign of a more serious TBI).7,8 That makes TBI-related photophobia the most common visual symptom of a critical brain injury.

Similar to light sensitivity, moderate or severe TBI can affect the perception of sound for many individuals—perhaps as many as one-quarter of patients, according to research.18 Not only can loud noises be painful for TBI survivors, but they also have a lower tolerance for noise as well.

The type and severity of the brain injury has also been shown to increase the risk for post-traumatic seizures among TBI patients. It typically occurs less often when compared with other physical symptoms, but it can occur at just about any stage of the post-injury and recovery period. The seizure usually manifests directly in the location of the scar or contusion in the brain, leading to symptoms that include:

These disturbances rarely last more than a few minutes; however, continued seizures can turn into epilepsy for TBI survivors.9,10 In addition, children are more likely to endure seizures as a result of their injury.

The eyes have a unique connection with the brain, and thus can be greatly affected by a serious head injury. One such concern relates to the disruption of the vestibulo-ocular reflex (VOR), which connects and stabilizes visual processing during head movements.11 Double or blurry vision also can be a problem associated with moderate or severe TBI. In addition, dry eye disease and ocular pain has also been linked to more serious TBI experiences.12

Ongoing pain, regardless of location, is another feature of moderate and severe traumatic brain injuries. It can affect the neck and shoulders, the back, the head—really anywhere on the body. Studies have shown that veterans may be at even greater risk than civilians. Furthermore, depression and other emotional symptoms often increase the risk for chronic pain among TBI survivors.16

Evidence has suggested that two out of every three survivors of severe TBI have cognitive deficits that affect their everyday mental wellbeing. These include:13

As a result, these concerns can dramatically impact a patient’s ongoing treatment and ability to return to normal function after the injury.

Studies have shown that more severe TBIs can lead to a disruption in normal sleep patterns, perhaps affecting up to 57% of individuals. This can take the form of insomnia (difficulty falling asleep) or hypersomnia (excessive sleep), with a slightly higher risk for the latter.14 Children also experience sleep disturbances, including drowsiness and impaired breathing during sleeping hours.15

Like other chronic illnesses, emotional distress is high with traumatic brain injuries. Depression, anxiety and post-traumatic stress are among the most frequent, impacting 10% to 33% of patients. Personality changes—such as apathy and aggression—also occur regularly with serious TBI. Although less common, psychosis and paranoia are known emotional complications as well.17

As noted, these are the leading symptoms of brain injuries that are classified as moderate or severe. However, these are not all the possible problems associated with serious head injuries.

At TheraSpecs, we specialize in creating precision-tinted eyewear to help light-sensitive TBI survivors find relief. If you are interested in learning how TheraSpecs might help, please click the button below.