You have probably heard that exposure to blue light affects your health, whether it is from fluorescent lighting, your smartphone or even from the sun. There is definitely some truth to that statement, and we'll separate fact from fiction and explore what the research really says about how blue light impacts your eyes and your brain. 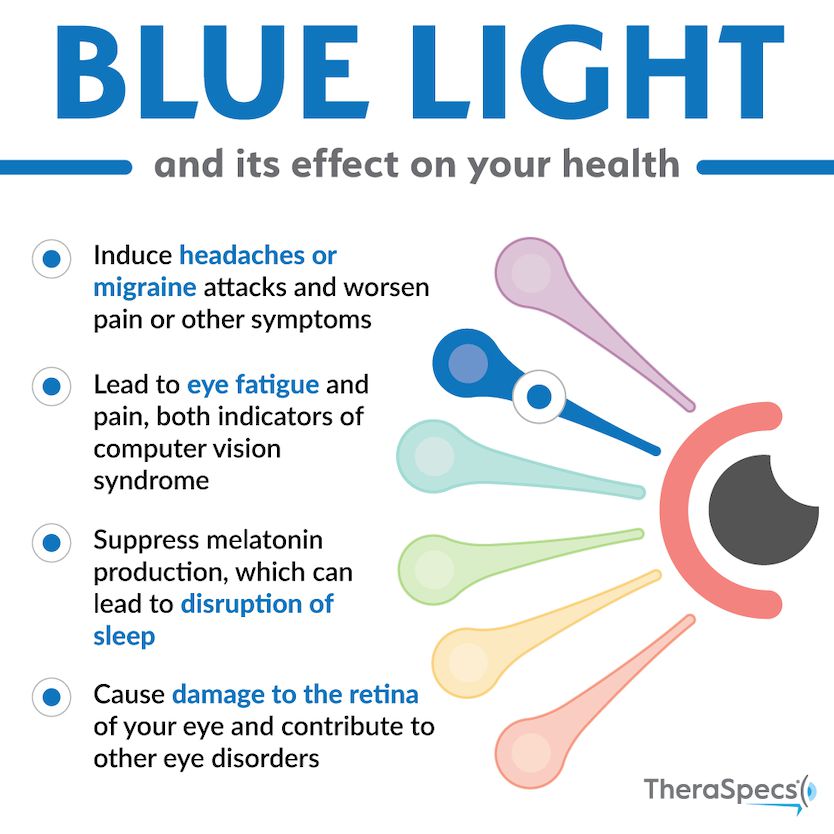 Blue Light Can Cause Headaches and Migraines

There are countless clinical studies that support the harmful effects that blue light can have for people who are prone to headaches or migraine attacks. Researchers have suggested that there is a specific neural pathway from the eyes to the brain—separate from how vision is transmitted—that ultimately causes blue light wavelengths to worsen headache pain and other symptoms. Others have pinpointed the exact wavelength to be in and around 480nm; it is exposure to this blue light that leads to high discomfort, a greater perception of pain and throbbing and even enhanced spreading of headache pain across the brain.1-3 And that does not even take into account that this color of light can increase other symptoms of migraine too, including: aura symptoms, photophobia and light sensitivity, dizziness/nausea, and more.

Does your job require you to stare at a computer for the majority of the day? If so, then you are absorbing a significant amount of blue light that can ultimately spell trouble for your eyes. Smartphone devices can also be problematic, and lead to eye fatigue and soreness—both of which are hallmark symptoms of computer vision syndrome and eye strain.4 In addition, blue light from computer use has been shown to worsen symptoms of dry eye as well. And the problems associated with these eye disorders are compounded the more you are exposed to light sources that emit high amounts of blue wavelengths.5-6

Artificial light has long been connected to disruption in sleeping patterns, so it should not be surprising that blue light is one of the prime culprits. More specifically, people who view a significant amount of these wavelengths in the evening hours are inhibiting the production of a hormone called melatonin, which regulates our desire for sleep. Looking at your mobile device for an extended period of time before bed has been shown to elicit greater drowsiness, lower energy and alertness the next day.7-8

Blue Light May Damage Your Eyes

This remains a controversial finding, but there is some evidence that the ultraviolet UVA light (which is abundant in high-energy blue light) can damage the retina of your eyes.9-10 The absorption of UVA light by the eye can lead to the destruction of specific membranes, and may also accelerate the development of cataracts and macular degeneration. However, it is important to note that these issues often occur as a result of longer duration of exposure.11

There Are Benefits to Blue Light Too

With all this negativity surrounding blue light, it may seem odd to learn that there can also be some benefits. For instance, it has been shown to improve alertness, productivity, and even memory.12 It makes sense too—blue light suppresses melatonin which would otherwise facilitate sleepiness, so looking at it during the day would conversely make you feel more awake and attentive. Interestingly, blue light therapy has been used as a non-drug treatment for various conditions, notably concussion.13 However, we have to mention that these are clinical studies whereby the amount of blue wavelengths can be precisely controlled. With the sheer prevalence of artificial light that we encounter (fluorescents, screens, etc.) as well as the blue light from the sun, it can be much more difficult to regulate our exposure in a more natural setting.

How Can You Reduce Blue Light Exposure?

The last thing you want to do is shut yourself in the dark because that can have physical and emotional consequences, so what are you options? Here are some ways that you can minimize the damaging effects of blue light:

How Light Can Trigger or Worsen Migraine Attacks

The Impact of LCD Screens on Post-Concussion Syndrome

2Main A, Vlachonikolis I, Dowson A. The wavelength of light causing photophobia in migraine and tension-type headache between attacks. Headache. 2000 Mar;40(3):194-9.