When migraine makes you so sensitive to light that screens, overhead lights, and sunlight all make you feel worse, relegating yourself to a dark room can seem like the only option. Chelsea tried to manage her light sensitivity by working under a blanket while wearing sunglasses in a pitch black room. Even then, she would still throw up one to three times every work day!

Chelsea was considering quitting her job to help manage the migraine attacks and was worried she’d never be able to have a career that involved working on a computer when she discovered TheraSpecs. Now she says, she feels a “twinge of nausea” thinking about her life before she tried TheraSpecs.

TheraSpecs aren’t the first glasses Chelsea has tried for managing migraine, but the others didn’t relieve her symptoms.

“I had bought regular ‘blue light’ glasses from my eye-doctor that had a faint yellow tint, but they did not help whatsoever. I ended up working every day from a pitch black room and not going out of my house until night time. If one shred of sunlight came in and hit my face I would immediately need to throw up and same if I had to go to a grocery store or anywhere with fluorescent lights or ride the bus into town for certain work duties. After my work days were over I couldn't even think about so much as cooking dinner or anything, I had to just recover until bedtime.”

Although Chelsea was working with a neurologist, none of the medications she tried provided much relief. She found TheraSpecs by searching for “light sensitivity” online. Getting her custom indoor TheraSpecs was a turning point for her.

“I finally got Theraspecs and was able to get through my days and even have one or two days a month without any light sensitivity at all! I'm able to have curtains open in my house during the day many days now and can handle going into stores and watching TV after a day of computer work. I can say yes to going out to the movies or a show once in a while too, less worried about being triggered by lights.”

Not only does Chelsea feel better with TheraSpecs, she said she gets a lot of compliments and likes that they match her currently pink hair. Plus, she says the world looks beautiful through the rosy lenses. 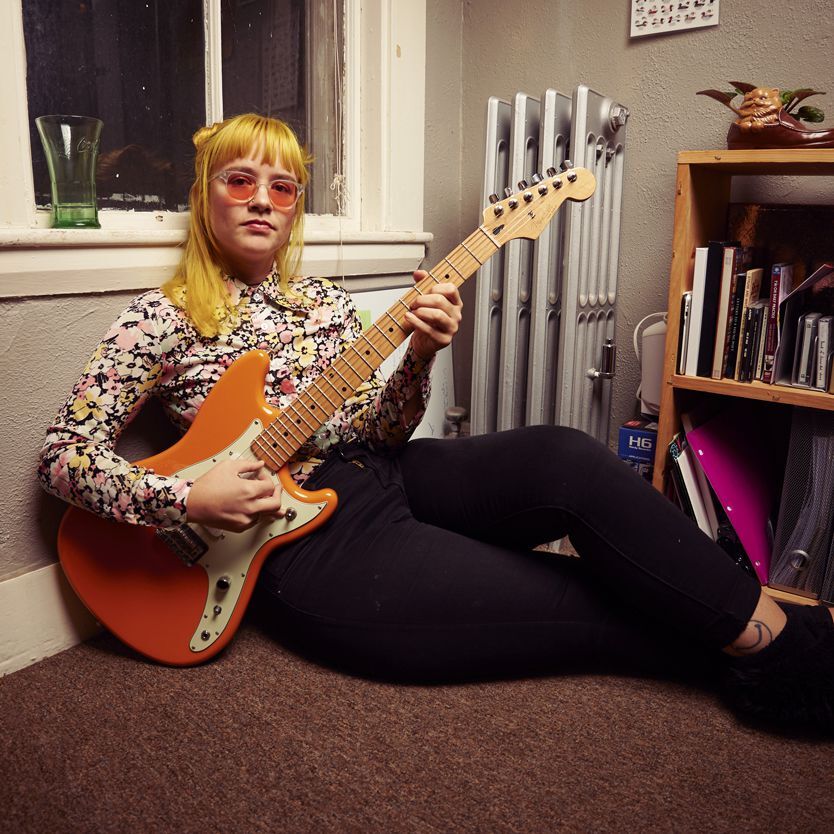 We found Chelsea’s story because another customer told us about a photo of her wearing TheraSpecs on the Instagram page for her podcast, Dear Young Rocker. Dear Young Rocker is a conversation with Chelsea’s younger self, whom she describes as an outsider. Chelsea’s vivid storytelling is thoughtful, funny, and insightful in a way that connects with listeners and prompts self-reflection. Chelsea believes the creativity that fuels her music, podcast, and writing is connected to migraine.

“Like most migraineurs, I think it's intertwined with everything. I think I've done so much creative work in part because I can't go out as often as other people. I can't tolerate the sensory overload of being in clubs, bars, or at parties very often and I can't have a drink without paying for it so I spent a lot more time alone in my 20's than the average person. That is of course isolating but I leaned into it and used my time alone to write…. The most inspiring feeling is that burst of energy and clarity after a migraine has 100% cleared. I don't take those rare moments for granted!”

When asked what she finds most rewarding about her podcast, Chelsea said:

“The messages I receive from people, especially younger people. Many people have let me know that they've felt empathy toward their own younger selves for the first time through listening to the podcast. Some have even started addressing and working on their own mental health issues.To know that I'm comforting and supporting people is immense. It's also wonderful when people send me their own stories and pictures of themselves as young rockers. I just love feeling connected to other people who've felt lonely or out of place in their lives.”

We’re thrilled that TheraSpecs have enabled Chelsea to work and live more comfortably with migraine. And love that one of the ways she spends her time is on a podcast that resonates so deeply with listeners. If you’d like to check it out yourself, you can subscribe wherever you get your podcasts.