There is a healthy amount of skepticism around if and how blue light glasses can protect against fluorescent lighting. After all, there can be some pretty outrageous claims made from brands who make these products; so not surprisingly, the protection and relief that people experience depends on the type of blue light being filtered and the amount being filtered.

To answer this question, let’s dig in deeper by first understanding how fluorescents expose us to blue light.

Different light sources can expose us to different amounts of blue light, and this amount can vary significantly based on a number of factors, such as:

Fluorescent light sources, not surprisingly, impart a wide range of wavelengths across the visible color spectrum. However, what you might not know is that some of the strongest concentrations of light come in the green, red and yellow portions of the spectrum. In fact, blue wavelengths (400-500nm) only represent about 20% of all visible light emitted by fluorescents. It’s also important to put into context that the total amount of blue light we receive from fluorescent lighting is a fraction of our exposure from indirect and direct sunlight.1 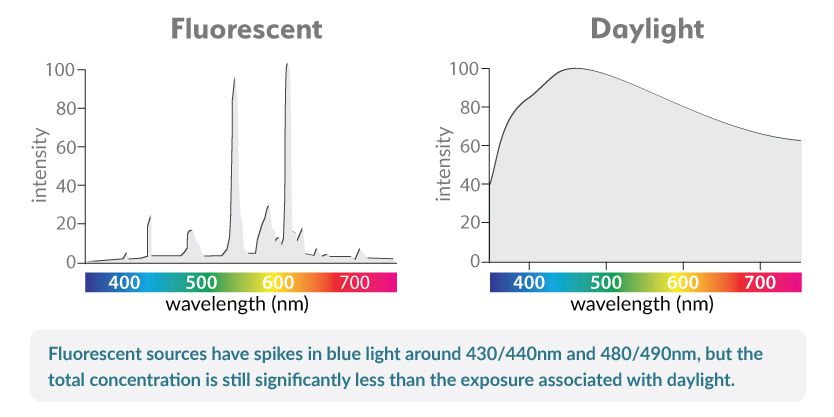 Still, that does not necessarily mean there is no, or even low, risk associated with fluorescent lighting. In fact, fluorescents have noticeable spikes in blue light around 430/440nm and again near 480/490nm, depending on the specific source. While these peaks are noticeably lower than other crests that follow, they can pose a threat for people who may be sensitive to this light.

In particular, people with neurological disorders (migraine, traumatic brain injury) can be highly sensitive to the band of wavelengths around 480nm. When combined with a reduced tolerance for bright light, which these individuals typically experience, the effect can be damaging—the onset of headaches, photophobia, and other symptoms, for example.2 It’s likely a big reason why these light sources repeatedly make the list of top triggers for people with chronic light-sensitive conditions.

In addition, the color temperature of the fluorescent lighting can alter the amount of blue light to which we are subjected as well as the relative spikes of these wavelengths. Colder, white lighting around 4000 kelvin appears to expose us to higher doses of blue light than light around 2500K, and experts have said that the exposure associated with even higher color temperatures (6000K and above) may pose the greatest health risk of all to our eyes.3,4 As a result, our team prefers and recommends warmer light bulbs for migraine and light sensitivity.

The Flicker of Fluorescents

Many fluorescents also have a high-frequency flicker or pulsing that is not visible to the naked eye but can be picked up by the brain. How does blue light factor into this? It appears that this rapid modulation is most intense throughout the blue light spectrum.5 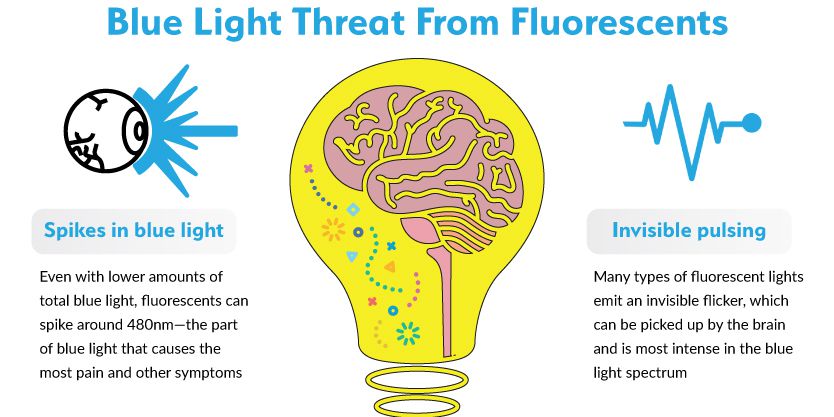 More investigation is needed to truly determine how this pulsing affects our health. Some researchers have indicated that lower frequency (120 Hz) lighting, which still creates an imperceptible flicker, creates less visual comfort and leads to a heightened stress response along with abnormal activity in the central nervous system. In particular, older fluorescent tube lights may exhibit lower frequency (but still invisible) flickering within a similar range to what has been previously studied. We have further evidence that fluorescent lighting can increase the likelihood of headache and eye strain symptoms, but higher efficiency alternatives may mitigate this impact.6,7

It seems there is no predictable outcome that results from exposure to fluorescent lighting and its invisible pulsing, although the risk is higher for people who have photophobia. Ultimately, a variety of factors play into whether they will ultimately affect a person’s health. Do they have an underlying condition that causes fluorescent light sensitivity? What type of fluorescents do they encounter? Are there other potential triggers in the environment that may be worsening their symptoms? These and other questions illuminate the nuances of the potential impact.

If fluorescent light sources have even modest amounts of blue light (exacerbated by their inherent pulsing) that can be felt in our eyes and brains, then it makes sense that so-called “blue light glasses” will help improve those symptoms. Right? The answer is not that simple.

Not all blue light glasses can claim that they effectively block blue light, no matter where it comes from. It may seem counterintuitive to their advertising, but some brands with clear or nearly-clear lenses remove as little as 2-6% of blue wavelengths from 450-500nm, rendering them unlikely to offer much benefit against the most harmful blue light (near 480nm) that can trigger symptoms of photophobia. Even at select lower wavelengths, these glasses only remove between 20-30% of blue light. 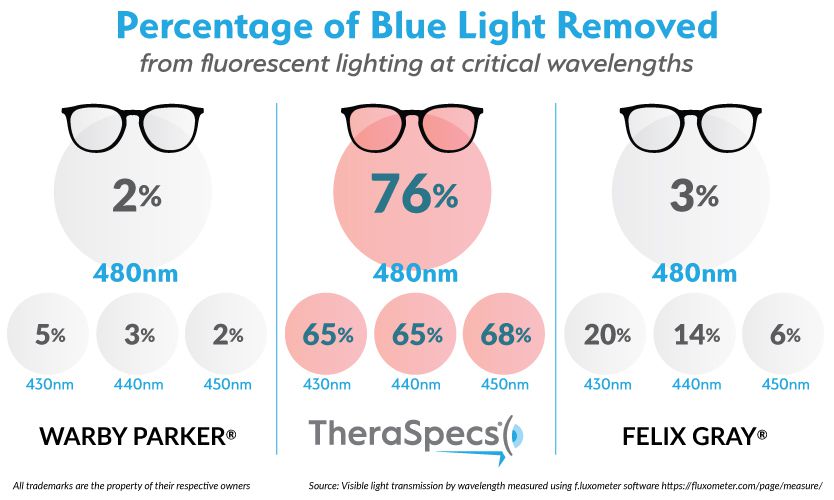 TheraSpecs, on the other hand, eliminate 76% of light at 480nm and up to three times as much as other brands at wavelengths lower on the blue spectrum. This makes them the most protective eyewear for a broad range of blue light and against the specific blue spikes in fluorescents that we previously described. As a form of FL-41 that represents the closest match to research based on filtering percentages, TheraSpecs also have clinical support to reduce the fluorescent pulsing by as much as one third—furthering the protection they give to users.8

These higher-filtering lenses also tend to remove more overall light, while still being lighter than traditional sunglasses, which can help offset the sensory sensitivities that people with photophobia often have. If the fluorescent lighting is particularly bright, blue light filtering lenses with these characteristics can make it easier on the eyes and calmer for the brain, all without the physical and social problems associated with wearing sunglasses indoors.

Does this enhanced protectiveness of brands like TheraSpecs translate to the relief felt by real people? We asked that question of light-sensitive individuals (n=72) who had tried both TheraSpecs and at least one other pair of blue light glasses, and 78% told us they preferred TheraSpecs glasses for defending against fluorescent light exposure. In fact, more TheraSpecs wearers felt improved shielding under fluorescents when compared with other benefits, such as LED or screen light protection and relief for headache and other symptoms.

In a small study featuring 30 participants with blepharospasm-related light sensitivity, FL-41 lenses improved the discomfort experienced under fluorescent lighting as well as overall photophobic responses.9 Regardless of light source, they can help reduce migraine frequency and severity too. Qualitative data has further suggested that photosensitive epilepsy, traumatic brain injuries and other light-sensitive disorders can enjoy relief from fluorescent lights with these types of glasses. Clearly, FL-41 eyewear lives up to its name—the FL is short for “fluorescent” after all—and its origins as a therapeutic tint first developed for fluorescent light relief.

More broadly, tinted glasses and/or contact lenses, particularly those that use a precision tinting process, can help with fluorescent sensitivities, but experts do not specifically identify blue light filtering as a requirement.10,11 This certainly makes it plausible that other glasses which block differing wavelengths may give patients positive effects, but the evidence we have points towards lenses that combine strong blue light and pulsing protection as being the most effective. Regardless, there are significant gaps in research around how various blue light glasses perform under certain light conditions, specifically fluorescents, which hopefully will be addressed in the coming years.

Without a doubt, certain brands of blue light glasses can give you a fighting chance against the ill effects of fluorescent lights, but you have to be selective in order to find the right pair. You should look for eyewear products that filter higher percentages (ideally 50% or more) starting at 430nm and above. And if you have neurological photophobia, you’ll want the additional high-filtering protection at and around 480nm—such as TheraSpecs or other FL-41 glasses—on account of its symptom-triggering potential.

Don’t forget other key features of glasses for fluorescent lighting, like large lenses to block the most intense blue light. Wraparound and/or side coverage as part of the frame can also maximize your protection.

If your eyewear can meet these qualifications, then you increase your chances of feeling relief under fluorescent lighting.