With the marketplace for blue light glasses exploding in recent years, their role as a tool for symptom relief—particularly stemming from light-sensitive conditions—has become increasingly scrutinized by researchers and patients alike. We consider existing clinical research and offer new data and insights to answer the question of whether blue light glasses can help headaches, migraine attacks and other symptoms.

The catalog of research around the benefits of blue light glasses remains mostly incomplete because there has been so little direct study of these types of lenses for visual and neurological symptoms. That said, among the (admittedly small) studies that have been conducted, they have generally yielded positive results.

One pilot study revealed that participants with blue light glasses saw improvement in symptoms caused by computer vision syndrome—namely headaches, eye strain, and blurry vision.1 Others have centered on the positive impact that these lenses can have on sleep and productivity.

However, it is important to note that the specific filtering capabilities of blue light glasses matter in the relief that people experience. For example, one study showed that higher-blocking lenses, specifically those with 50% or more filtering in the blue spectrum, can lower eye fatigue, pain in and around the eyes, and eye itchiness following computer use.2 A separate investigation noted that 50% blue blocking lenses mitigated visual impairment in people with dry eye.3

Similarly, athletes using yellow-tinted lenses (which typically block more blue light than clear lenses and are likely closer to 50% filtering described above) felt fewer post-concussion symptoms.4 In addition, specific eye and brain processes that may be linked to photophobia-related visual disturbances showed the most improvement using a similar lens filter.5

There is also an entire class of blue light blocking lenses that use the FL-41 tint, which is generally more protective than clear or yellow-tinted glasses and is supported by additional clinical evidence spread across more than three decades. These studies show that FL-41 glasses can reduce migraine attacks by 74 percent and also lower photophobia and light sensitivity caused by a variety of conditions.6-8 They currently represent the most clinically-validated option for blocking the blue light that can trigger ocular and neurological symptoms.

Clinical research doesn’t tell the entire story, which is why our team here at TheraSpecs directly surveyed light-sensitive patients with a variety of underlying conditions about their overall satisfaction with these types of glasses. This led to a wide range of responses, reflective of the varying brands and effectiveness of tinted eyewear for blue light. 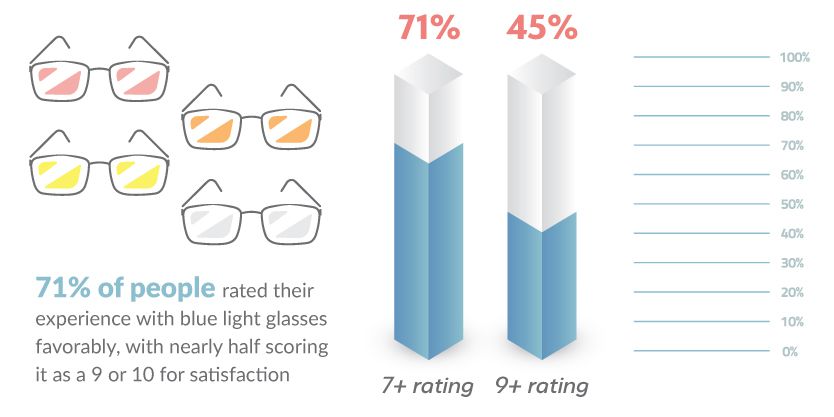 Overall, the average rating among respondents who tried some eyewear with a blue light filter was 7.3 on a 10-point scale (n=313). Nearly half of all survey participants evaluated their experiences with these types of glasses as very favorable (9 or 10) in terms of impact. It's also important to note that 93% of these individuals self reported as having some condition that causes photophobia, with three out of every four specifically citing a primary headache or migraine disorder.

Coupled with other anecdotal indicators, such as 3rd-party reviews on websites like Amazon as well as medical expert recommendations, it certainly suggests that more people find at least incremental relief for their neurological symptoms with these lenses than those who do not. However, the vast differences in the quality and design of blue light glasses requires that we look more granularly at specific lens options.

For example, TheraSpecs scored an average rating of 8.3 for self-reported protection and relief whereas non-TheraSpecs glasses were only a 5 out of 10. Curiously, overall satisfaction was slightly lower among those who tried more than one brand of blue light glasses, perhaps reflecting the constant search for relief that many chronic illness patients undertake as well as a higher level of scrutiny for the products they do try. Still, as you can see below, the gap between TheraSpecs and other types of eyewear remained constant; this may suggest that when people find blue light lenses that make a difference (in this case TheraSpecs), it actually makes them feel more disappointed in less-effective alternatives they've worn previously.

It was also apparent that patients experienced greater levels of symptom improvement with more heavily tinted lenses that offer better overall blue light protection, particularly from those with the FL-41 tint application. Even so, the findings showed that there is still significant variability in how people take to FL-41 too, with TheraSpecs users reporting 37% more satisfaction versus other FL-41 glasses they may have tried. 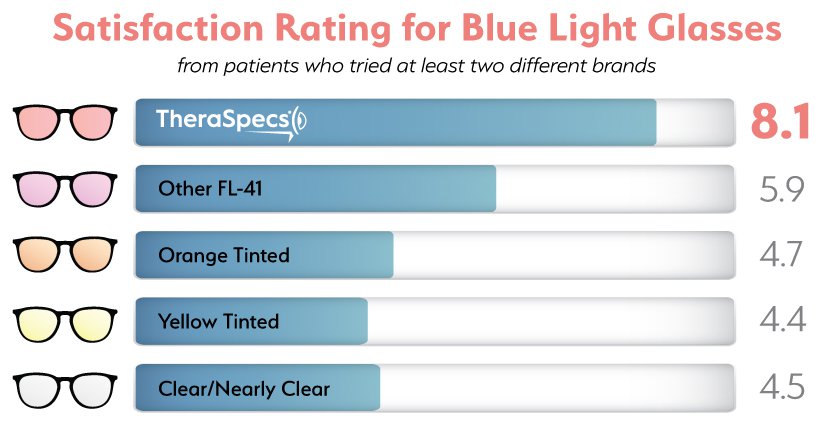 This is further underscored by the fact that they were nearly 50% more likely to wear their TheraSpecs three or more times per week. This increasing regularity of use, in combination with higher satisfaction scores, indicates that patients believe these glasses offer the most comprehensive protection against and improvement for their light-triggered symptoms.

Beyond just universal satisfaction, people seem to have particularly good results with blue light blocking glasses for nine of the fifteen symptoms about which we asked, specifically:

For each of these complaints, at least half or more of all qualifying respondents expressed that their light-filtering eyewear made a noticeable difference.

Taking it one step further, we compared the responses from people who had tried TheraSpecs glasses and any other lenses that claimed to block blue light. In aggregate, TheraSpecs outperformed all other eyewear products for each identified symptom—with a particularly high success rate for light sensitivity, eye pain or eye strain, headaches, and migraine attacks. 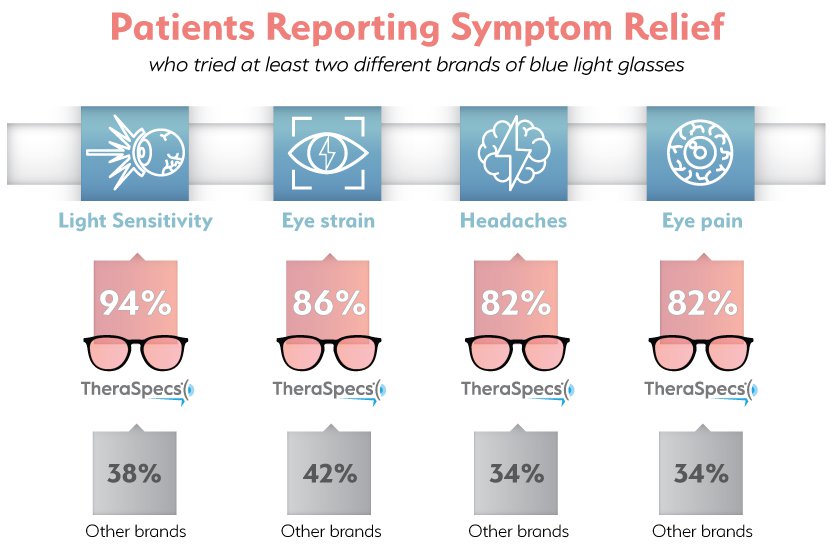 Even for those issues (such as anxiety, seizures, visual and nonvisual aura) in which TheraSpecs were less reliably effective, they were still decisively more likely to generate relief versus other brands.

This suggests that TheraSpecs not only work for migraines and headaches, but they are significantly better for most chronic and/or debilitating conditions in which light is a known trigger. And patients seem to agree with that assessment, with 75% of qualifying survey participants (n=75) rating TheraSpecs as providing more relief for their symptoms in a direct comparison with their other blue light filtering glasses.

Relief for symptoms is not the only desirable quality for these lenses though; how well people believe they protect against blue light-triggering sources is equally impactful. Not surprisingly, TheraSpecs stand head and shoulders above the competition, with 70% or more of surveyed patients saying that they preferred TheraSpecs for their protection against screen lights, fluorescent lighting, and other artificial sources (such as LEDs). This is consistent with independent transmission data that shows TheraSpecs block more blue light at 480nm—the most triggering wavelength for neurological symptoms—and across a wider spectrum of harmful light.

Here are just a few stories from real TheraSpecs users, supporting the enhanced benefits they receive over less effective options. 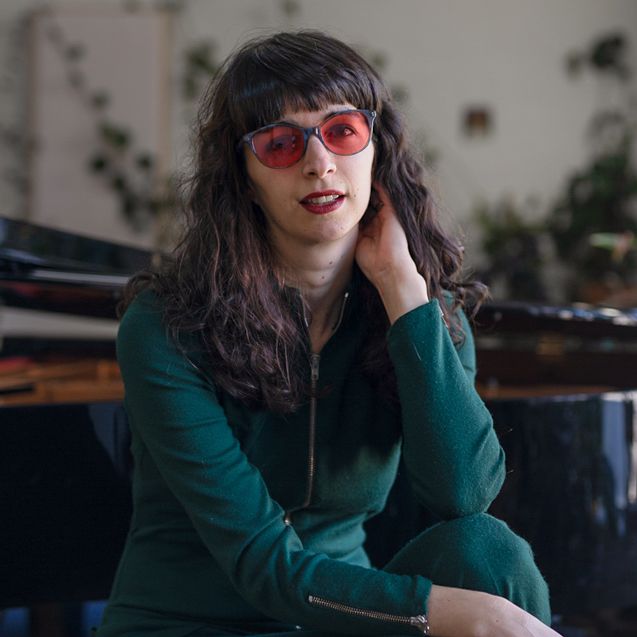 ★★★★★
BETTER FOR PHOTOPHOBIA
"I was previously wearing [other] blue blockers for my photophobia. I have found the TheraSpecs better for stopping or minimizing the photophobia, and my eyes have also been less dry. I've hardly needed to use eye drops, whereas before I was using them almost daily."
-Hanna, Victoria, Australia 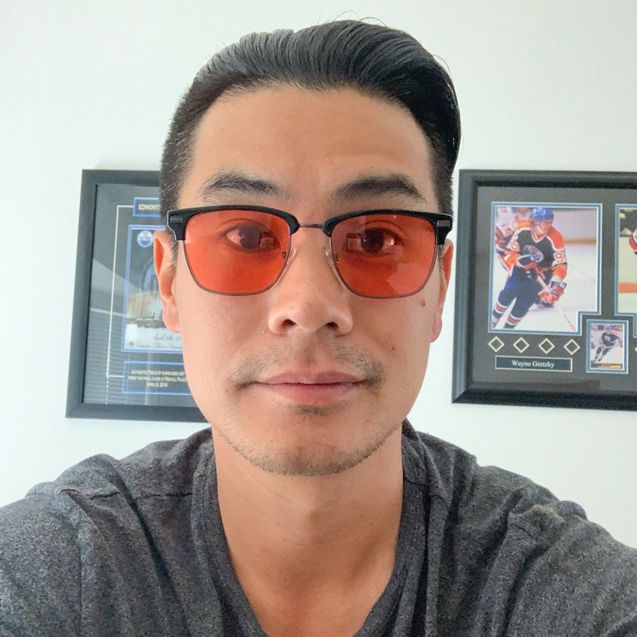 ★★★★★
A GAME CHANGER
"If I were to compare these TheraSpecs glasses to other blue light glasses, I would say it helped about 25-30% better, which is a game changer for me because I stare at a computer all day. And my eyes just honestly feel smooth."
-Sean P., Edmonton, Canada 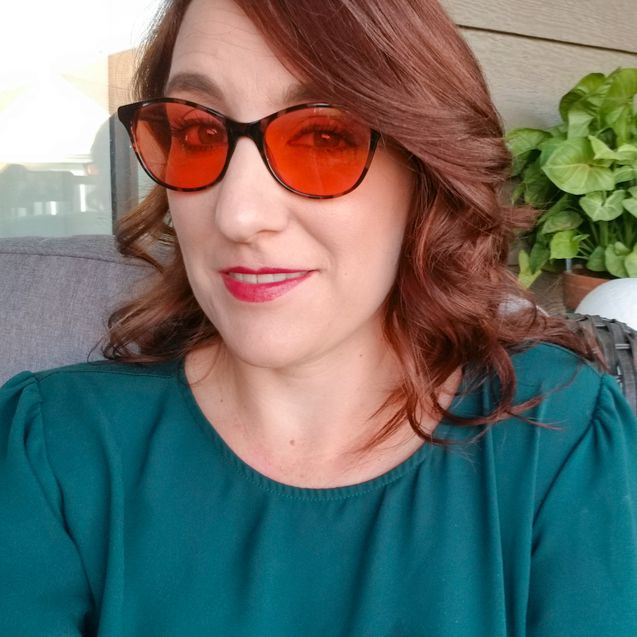 ★★★★★
TREMENDOUS RELIEF
"After comparing various blue light-blocking glasses and other FL-41 lenses I decided to try TheraSpecs and I’m so glad I did! They have provided tremendous relief and allow me to function without the fear and dread of recurrent symptoms."
-Aimee, Texas, USA

What can we take away from this analysis? Although there is no singular “cure-all” product for your health, the use of blue light glasses can be an effective strategy in reducing visual and neurological symptoms. However, as we have illustrated, there is also a sizable gap in the success rate of specific categories of blue light glasses, based on the tint being used and its overall blue light protection. In particular, TheraSpecs blue light filtering glasses are reported by patients to offer the most relief for their light sensitivity, headaches, migraine attacks, and ocular complaints, and they are worn more regularly than other glasses due to these benefits.

Insights from this report were generated from data collected via an email survey of people who self-identified as sensitive to light. Additional clinical references are also included below.