A favorite treatment tool among people with migraine are specially-tinted glasses that can help with the light sensitivity that often co-exists with the condition. Over the years, patients have adopted the term "migraine glasses" to describe eyewear that has been designed and studied for its benefits on those with the headache disorder.

But do these special migraine glasses actually work? We analyzed data and insights from thousands of patients who have tried TheraSpecs as well as other brands and are proud to share some exciting conclusions.

BOTTOM LINE: 9 out of 10 patients find relief with precision-tinted glasses for migraine

The headline says it all. After more than five years in business, nearly 90% of the tens of thousands who have used precision-tinted TheraSpecs glasses have experienced relief for their migraine-related light sensitivity. Some of the reported benefits include:

This is consistent with additional insights from a survey our team conducted in the fall of 2017; it showed that 85% who have worn any brand of migraine glasses have seen at least some improvement in their symptoms, with the vast majority of those enjoying significant relief. In fact, they were a more reliable treatment option than many other common remedies for light sensitivity. Other brands who use a similar tint have claimed comparable results.

Moreover, after several weeks of use, TheraSpecs customers have rated their experience with the glasses as a 4.8 out of 5;1 and more than 72% would enthusiastically recommend migraine glasses to a friend or acquaintance who also suffered from the condition.2 This paints a clear picture that this unique product is a valuable asset in the toolkit of migraineurs. 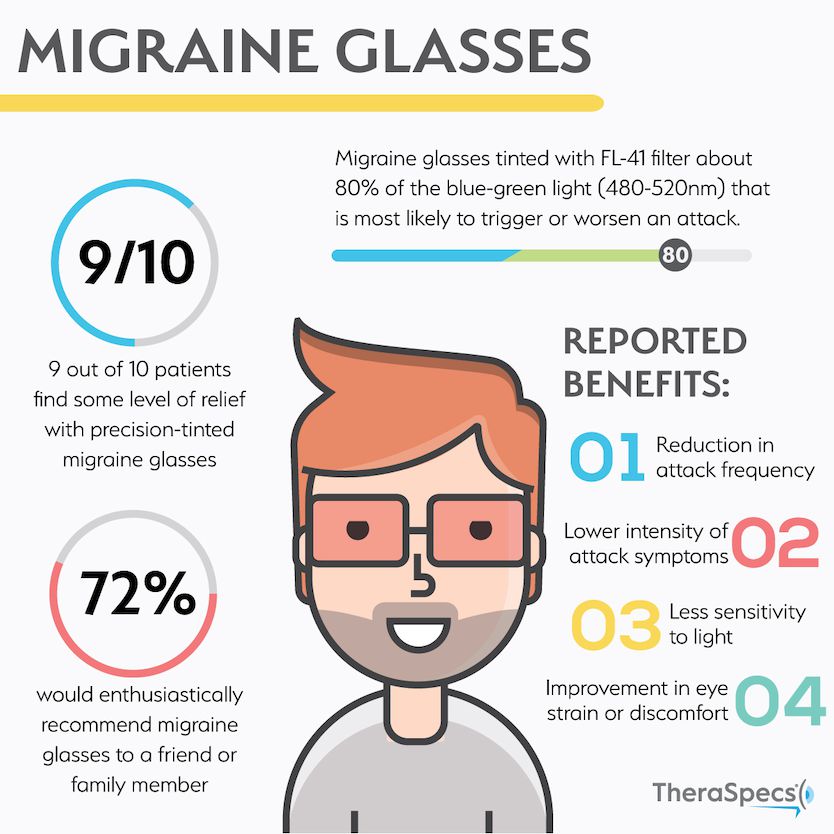 Why are they so effective?

The best migraine glasses are those tinted with FL-41, a coating that has been studied since the early 1990’s for its therapeutic benefits. Most American patients with migraine are utilizing this tint in their therapeutic eyewear, and it is what hundreds of headache specialists and other medical professionals are referring their patients.3

The key is in the wavelengths of light being filtered. Evidence shows that people with migraine—who already have a lower threshold for bright lighting—are most reactive to blue-green light. Exposure to fluorescents and other artificial sources as well as sunlight subjects the eye and brain to these wavelengths, which in turn initiates a migraine attack or worsens one already in progress. The FL-41 coating in migraine glasses blocks 80 percent of this type of light, thus creating the relief that many users experience.4,5 It is also what gives the lenses their uniquely pink- or rose-like color.

In addition, the indoor version removes about half of all light, thus helping compensate for the lower brightness tolerance of people with the headache disorder. And additional protective features, such as wraparound frames and/or large lenses, can enhance the relief of the tint by blocking peripheral light as well. Ultimately, this all adds up to specialized, comprehensive protection for those who deal with migraines.

When do patients begin to feel this relief?

There are two common scenarios that a person might expect when trying migraine glasses for the first time.

Scenario #1: You feel an immediate “calming” of the eyes, with long-term migraine relief building over time

We hear this often. Light loses its intensity within seconds of putting on a pair of lenses with the migraine tint, and it just grows the more they are worn. This is supported by the earliest known study of these rose-colored glasses, which showed that initial improvements were felt in the first 30 days, but most importantly it continued after 120 days and beyond.5

Scenario #2: You experience an adjustment period before noticing an improvement in migraine attacks and/or symptoms after 2 to 6 weeks

Although it seems to be rare, it can take some time before migraine glasses can do their magic. We see this most often with people who are accustomed to wearing sunglasses indoors to prevent their attacks. In fact, in the study we previously cited, the brain hyper-reactivity that is so common with migraine had actually diminished after 120 days; this was not initially reported after the first 30 days, signaling that changes and improvements occur in the brain over time. This is why it is important not to get discouraged if you do not have the immediate relief.

For whom are they most effective?

Now you may be wondering: Will they work for me and my migraine? It’s natural to think that your specific variation of the headache disorder is especially complex, or that what works for others will not make the same impact for you. And while each brain is different, the evidence suggests that migraine glasses actually have a pretty high likelihood of working for you; if light sensitivity and photophobia negatively influence your attacks—either as a trigger or a symptom—then you can benefit from tinted migraine glasses.

In fact, they can be most effective for people with any type of migraine (vestibular, hemiplegic, aura, etc.) who also:

Are there any side effects?

There is no known risk for dependency associated with wearing migraine glasses for prolonged periods of time. The fact is the indoor lenses (which still lets in half of all light) are not dark enough to negatively adapt one’s eyes in the way that darkly-tinted sunglasses would. This makes them safe to wear inside on a regular basis.

A very small percentage of patients may notice an adjustment period in the first few weeks or find that they simply do not work at all. For those individuals, they might experience issues like: minor distortion of vision, perceived higher level of brightness or even an onset of headache or other symptoms. These often dissipate with persistent use as the eyes and brain adapt to the tint, but they can continue in rare cases. Lighter or darker versions of these lenses, prescription options, as well as different frame styles (for instance flatter vs curved frames) are also available to better accommodate the specific needs of a patient and address the majority of these issues.

Lastly, we would be remiss if we did not at least acknowledge the social circumstances of wearing tinted eyewear for migraine. Most of the time, there is curiosity from others who are genuinely interested in how migraine glasses work and often find them flattering:

However, migraine remains a source of stigma both professionally and personally. Publicly wearing these types of glasses brings visibility to an often-invisible illness—which can prompt insensitive questions, comments and/or other behavior. Again, we want to emphasize that it is rare, but it is real. The vast majority do not experience this, and even those that do often find it a worthy trade off if it means feeling significantly better, but another person may have a different opinion.

In response to the question "do migraine glasses work?" — it seems pretty clear that they provide a tremendous benefit to a large percentage of migraine patients. So what are you waiting for? Try TheraSpecs migraine glasses and get relief today!

3Bullock G. What is FL-41 and How Does it Improve Light Sensitivity? 3 October 2018. Sourced from https://www.theraspecs.com/blog/what-is-fl41-for-light-sensitivity/.