Visual snow syndrome is a condition in which a person’s entire visual field is clouded by a persistent static-like abnormality. But visual snow can result in other symptoms as well, including photophobia or sensitivity to light. While researchers do not know exactly why this occurs, it may be the result of a complicated relationship that visual snow shares with migraine and migraine with aura. Throughout this article, we’ll unravel the tangled web between visual snow, migraine and photophobia.

What is Visual Snow?

Visual snow, or visual snow syndrome, is a rare and poorly understood neurological disorder that affects the totality of a person’s vision. It has been so misunderstood that many in the medical field believed for a time that the symptoms might be psychosomatic in nature or that they are all in a person’s head. But we know so much more about it today, which has changed the perspective dramatically. As Dr. Kathleen Digre, a distinguished professor of Neurology and Ophthalmology at the University of Utah and president of the American Headache Society, described for Neurology Today in early 2019:

"Visual snow is a real phenomenon. These individuals are not crazy but are experiencing noise in the visual system. Most of the time simple reassurance is all they need. For those who are really bothered, we need to find better treatments."

So what is visual snow then? The core physiological experience is described as static or dot-like disturbances that paint the entire visual field, and they can appear in color, black and white or even transparent. However, it can lead to other visual and nonvisual symptoms too. In fact, up to 75% of patients have these auxiliary issues outside of the visual static described above. Some of these symptoms include:

Of course, migraine and headache disorders are also commonly experienced by those with visual snow, which may indicate a specific connection between the two.

Visual snow syndrome is often misdiagnosed as a symptom of migraine with aura; however, researchers now believe it to be a separate condition—although it may and often does result in migraine features or symptoms.1 The big difference is the fact that the aura of a migraine attack can result in ‘positive’ symptoms (e.g. floaters, zig-zag patterns) and/or ‘negative’ symptoms (e.g. vision loss) that may only affect part of a person’s vision. In addition, these issues usually dissipate within a few minutes to an hour. Conversely, visual snow is a constant symptom that basically never ends and occupies the full visual field.

Further evidence that these two are unique is shown by the fact that traditional migraine remedies, such as triptans and neurostimulation, are not effective and may actually worsen visual snow symptoms.

In spite of this diagnostic separation, both disorders still have several connections that link them—which ultimately translates to numerous shared experiences and symptoms among patients with either of these conditions. This is why the visual complaints often mirror one another. In addition, many people with visual snow syndrome also have comorbid migraine (both with and without aura), with at least half of all patients meeting the criteria for the primary headache disorder.2-4

Other migraine subtypes have also reported visual snow symptoms, including both vestibular and hemiplegic migraine. In addition, some may even develop ongoing static-like symptoms with post-concussion headache too.5 Unfortunately, the co-presence of any type of persistent or episodic migraine condition has been shown to worsen the auxiliary symptoms and intensity of visual snow.2 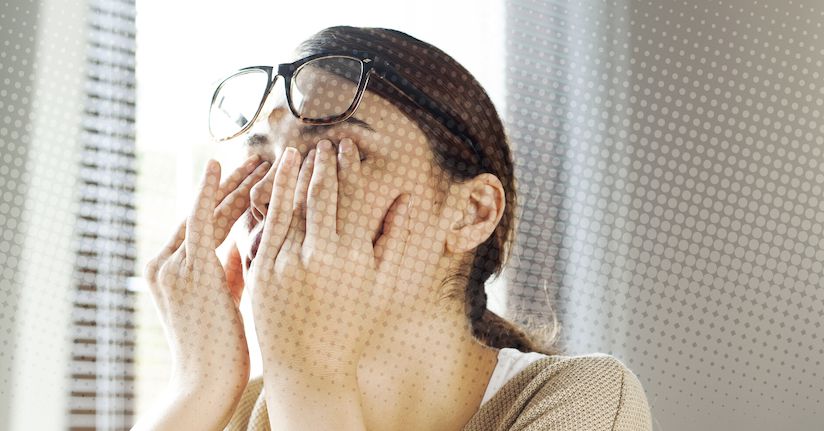 How does light sensitivity and photophobia affect these issues? For starters, we know that it occurs pretty regularly for both conditions. Not only do 80-90% of people with migraine have this sensitivity, but more than 70% of those with visual snow experience it as well.2,4 In both, photophobia generally manifests as light being either ‘too bright’ and/or ‘causing pain.’ This may reflect the brain’s lower tolerance for bright light, which is a known problem associated with migraine and may similarly impact visual snow.

Furthermore, as mentioned previously, there is greater risk for photophobia among those with both conditions. In fact, when studied, these individuals were three times as likely to also report sensitivity to light.2

Of course, visual snow and migraine are already disabling for those who have to endure them. With the added consequence of photophobia, patients may further feel as though they are unable to participate in their normal activities—only adding to the negative impact of these disorders.

Light as a “trigger” for visual snow?

Since visual snow symptoms generally do not have an ‘off’ switch, then it is highly unlikely that a person can be triggered by external stimuli such as light. That said, many patients with the syndrome believe that their visual complaints can be exacerbated by the following luminous sources:

In addition, high-contrast and/or strobe lighting can specifically bring about the afterimages and secondary visual symptoms frequently cited with visual snow. This may further link it with migraine because we know migraine attacks and symptoms (including visual aura) can absolutely be induced by light exposure.

A biological basis has been suggested for migraine-related photophobia and visual snow. Researchers identified specific activity in the occipital lobe of the brain as common to both conditions; here, the visual cortex is located and helps process vision among performing other visual functions. This may reinforce both migraine-related sensitivity to light and visual snow syndrome as primary deficits in sensory processing.

Curiously, a different pattern of activity in the brain was recorded among migraineurs between attacks, which may further distinguish it from visual snow. However, since the neuro-visual pathways appear to be impaired in visual snow and photophobia in migraine, they are not wholly separate either.2

As a result of these interconnections, leading experts have enough clarity today to suggest a modified diagnostic criteria for visual snow as a clinical syndrome, which includes photophobia and light sensitivity as a secondary indicator.1 For this reason, it was introduced in the third edition of the International Classification of Headache Disorders as a 'complication of migraine.' While additional progress is still needed, this will hopefully translate to more accurate diagnoses and treatments for patients in the future.

TheraSpecs are tinted to reduce light-related pain and migraine attacks, and some patients with visual snow and photophobia have given them a thumbs up for providing relief for their symptoms as well. Here’s how one mother described the benefit of these 'photophobia glasses’ for her child:

"I purchased TheraSpecs for my daughter, who suffers from a very rare condition called Visual Snow. As she's grown older, her visual snow has made reading (which she loves) increasingly unpleasant, leading to headaches, etc. So when we heard from an acquaintance who also has visual snow that TheraSpecs had helped her with that condition, we decided to give them a try, and my daughter is reading books again with no headaches!"

Others have mentioned improvement with visual clarity, reduced visual stress and greater comfort under bright fluorescent lighting. In addition, prominent specialists like Dr. Digre have publicly recommended the tint that TheraSpecs uses for patients with visual snow—particularly when it is accompanied by migraine.

Top Triggers of Migraine with Aura