The sirens of an emergency vehicle. A broken overhead fluorescent at work. Pulsing stage lights during a concert. Many people with migraine hate these because of the likelihood that the flashing lights might trigger a painful attack. And even a rare few see light flashes as part of a visual aura. In this post, we explore just how problematic these light-related issues can be.

We know that about one quarter of all people with migraine have pre-attack disturbances known as an aura, and many patients report that it primarily affects their vision. It is not surprising then to learn that these symptoms are most likely to manifest as flashes of light, small bright dots and colorful and/or bright zig zags lines (known as a scintillating scotoma). Interestingly, the aura often includes multiple vision-related changes, which are also likely to be consistent across attacks. And they have been shown to persist for no more than 30 minutes, although they can continue longer for some.1,2

Although it is rare, people who do not typically experience an aura have also reported spontaneous visual scotomas that last for just a few seconds during the so-called headache or attack phase. Similarly, it is true that even patients who normally have migraine aura do not necessarily have an aura every single time. In addition, headache may not always follow a visual aura for patients—in what is known as migraine aura without headache.

Another unique type of migraine that can feature flashing light anomalies is called retinal migraine. This particular subtype of the headache disorder only affects one eye and can be distinguished by "scintillations," or disturbances that look like twinkling lights, according to the American Migraine Foundation. Like other forms of migraine, it is most common among women of childbearing age who also have a history of migraine with aura.3

Both migraine with aura (either with or without headache) and retinal migraine are often categorized broadly as ocular migraine. Although this is not recognized as primary headache disorder, it is commonly used among patients as a way to account for the visual effects of their attacks, including light flashes. 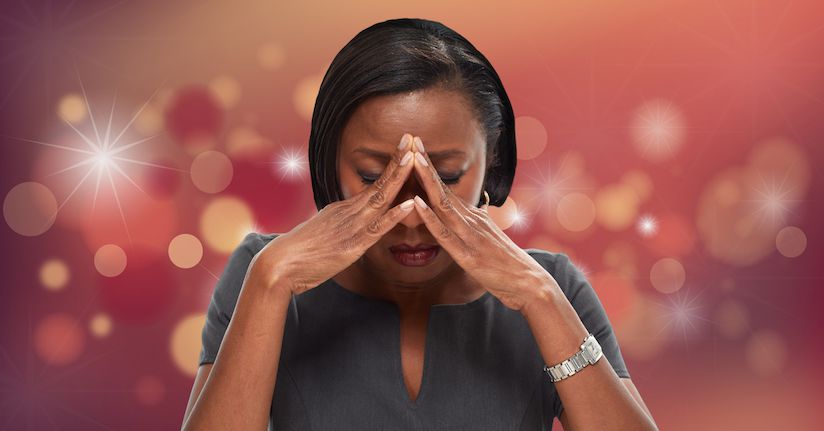 Flashing lights can be a frequent trigger of migraine attacks

One of the most reliable triggers of migraine episodes are flashing or flickering lights. In our survey, we found that people with light-sensitive migraine believed them to provoke attacks more regularly than fluorescent lighting, sunlight or digital screens. This may translate to approximately 16% of patients who report it to consistently precipitate their attacks—although it may trigger at least one episode for up to one-third of all people with migraine.4 And there are plenty of situations where you may be exposed to flickering lights, such as:

During a migraine attack, do you find that flashing lights worsen your pain or other symptoms? If so, then this can indicate that you are also highly sensitive to light (also known as photophobia). In fact, 80% of patients in one study cited they were sensitive to flickering stimuli, with many actually showing a strong desire to also avoid flashing or flickering lights as much as possible.5

Experts believe that the intensity of the light/dark contrast along with the length of exposure are primarily responsible for tripping the neurologic pathway related to photophobia; they also have found that people with migraine generally have a lower tolerance for even low-contrast flicker. And you may be more sensitive to flashing light as well as have greater discomfort from it the longer you have had migraine too. These reasons may ultimately also explain why non-moving striped patterns can similarly affect people with migraine.6,7

It is important to note that blue light wavelengths, particularly from artificial flashing lights, can agitate migraine and therefore may compound a person’s aversion to flicker.

TheraSpecs might help reduce the harm of flashing lights

Not only can TheraSpecs tinted glasses for migraine reduce blue light exposure, but they can also minimize the pain caused by flashing lights. One of our favorite testimonials comes from Rachel in Connecticut:

"The glasses worked! I thought I would never be able to go to another concert again. I have light-induced migraines and the lasers and flashing lights used to ruin my concert experience. I just got back from a Justin Timberlake concert - wore the glasses - and I’m so happy to report, NO migraine and I was able to enjoy the concert :)"

Take advantage of our 60-day return policy to see if they can help you. Click below to learn more about why they are so effective.

6 Visual Symptoms and Disturbances of Migraine

8 Common Triggers of Migraine with Aura

4Shepherd A. Visual Stimuli, Light and Lighting are Common Triggers of Migraine and Headache. Journal of Light & Visual Environment. 2010;34(2):94-100.