In recent years, light emitting diodes (LEDs for short) have gained tremendous popularity as a more energy-efficient alternative to the traditional incandescent and compact fluorescent bulb. However, as they continue to dominate the lighting market, the question becomes: what, if any, is the cost to our health? In this post, we discuss how some people can experience light sensitivity (photophobia) and other issues like migraine attacks from exposure to LED lights.

What is LED Lighting and How are We Exposed to It?

According to leading authorities, LEDs are an energy efficient and inexpensive way of providing lighting in many home and work settings, and their use currently represents over half of the general lighting market today. They only utilize approximately one-fifth of the energy of an incandescent bulb, and the answer to how they impact our eyes and brain may lie in precisely how they function.

This type of lighting typically produces an amber, red, green or blue light which is then converted into the white light most commonly used in homes. The more “white” the color of the LED, the more blue wavelengths are contained therein; this is an important factor because, as we discuss below, the impact of blue light on how we feel can be quite significant.

Unbeknownst to many, we are chronically exposed to LED lights on a daily basis. They are used in many commonplace applications such as:

In addition, many of today’s devices that are labeled LCD (‘liquid crystal display’) are actually backlit by an LED bulb, which inherently provides similar benefits and risks as general LED lights. More specifically, they can produce a flickering effect that can cause problems for many people, especially those who are sensitive. Ironically, older LCD screens were lit by a compact fluorescent bulb, which also could generate this unpleasant flicker.

The neurological effects of LED lighting remain in question, but there continues to be emerging research in the area. Recently, a French health report acknowledged that intense exposure to the blue light specifically in LEDs can lead to eye damage and natural sleep disturbances. This is consistent with other data that shows blue wavelengths can contribute to the onset of migraine attacks, headaches, eye strain and other symptoms.1,2

Experts were quick to note, however, that these findings do not necessarily extend to our regular exposure to lower-brightness sources—such as smartphone use—although it can produce a cumulative effect over time. That said, they did warn that the strobe-like flickering of some LEDs can absolutely lead to headaches and visual complications. This is supported by other research which indicates that LED-lit LCD devices are more likely to lead to visual symptoms ranging from difficulty refocusing to eye strain and bright light sensitivity. This was especially worsened for those who read on their smartphone in the dark.3

Recently, researchers found that LED exposure—specifically based on color—leads to higher rates of headache and migraine symptoms (including photophobia), giving better insight into the origin of light sensitivity within the eye itself.4 While it is unclear exactly why LED lighting triggers these issues, its inherent properties are believed to play a role.

Another offensive source of LEDs are car lights. Their relative brightness, particularly on darkened roads, can negatively affect people without a chronic headache disorder; and they can be especially brutal for those prone to light-sensitive headaches or migraine attacks. Glare, and any pain or discomfort produced by it, can also be an unpleasant side effect of LED exposure on the road.5,6 As a result, it should be no surprise that LED headlights on vehicles are one of the biggest sources for painful light sensitivity at night.

We know that both LEDs and fluorescent lights can cause visual, headache and migraine symptoms. In addition to the high proportion of blue light wavelengths, these issues are likely a direct result of the rapid flicker they both emit. Even more surprising is that this flickering may be more prominent in LED sources, particularly at brightness levels less than 100 percent. This occurs because LEDs can only be completely on or completely off, so they have to produce the flicker in order to simulate these dimmer settings.

Arnold Wilkins—one of the leading researchers on lighting and health—has stated that LED bulbs switch on and off hundreds of times per second. This can lead to symptoms of eye movement dysfunction, double vision, headache, dizziness and the feeling of being unwell, all within 20 minutes of exposure! And these effects may be more severe when compared with fluorescent lights. Moreover, people with persistent post-concussion migraine report greater aggravation of their symptoms to LED and LCD displays, including head pain and photophobia.7

In a more direct comparison, certain colors of LED light has been shown to yield fewer negative effects than conventional fluorescents, but more research is needed to verify these findings.8 As a result, the jury is still out regarding whether or not LEDs or fluorescents are worse for people with migraine, light sensitivity or other chronic disorders. 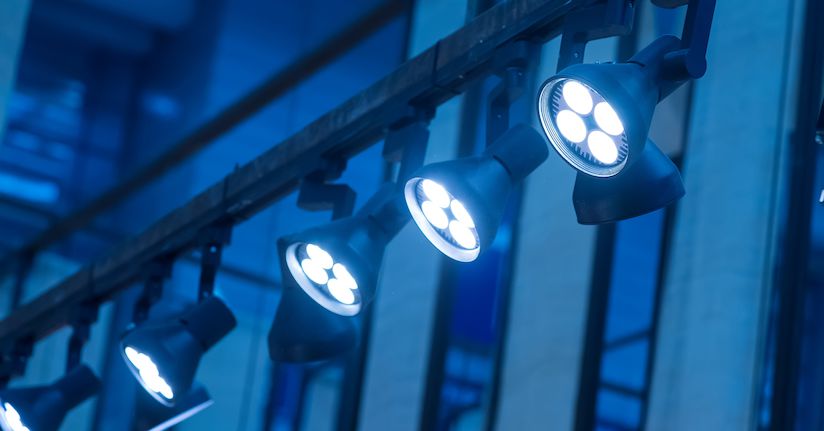 With new technology often comes new features. This is especially true in the development of organic light emitting diodes (OLED) found within many newer devices. Instead of using a backlight, each pixel in an OLED screen produces their own light. And this may change how our brains interpret that light; a small study showed a reduction in the number of “headache days” and corresponding emotional symptoms for migraine patients in environments with this type of lighting versus standard LEDs.9 As a result, this also likely reduces the frequency of episodes of light sensitivity and photophobia.

The color of light also matters. As we showed previously, blue light remains a central component of LEDs and continues to be a primary culprit for worsening migraine attacks and sensitivity to light. In addition, red- and white-colored LED lighting also activate areas of the brain that are suspected of producing photophobic and migraine pain. Curiously, green lighting may be the least likely to instigate migraine attacks, but more investigation is needed to determine if any practical applications exist for patients.4 And remember: the color that you see does not necessarily reflect the amount of blue wavelengths you absorb; in fact, cold, white LEDs have the highest concentration of blue light even though they do not directly appear as blue to the eye.

How to Improve LED Light Sensitivity

While it is highly unlikely for anybody to completely rid himself or herself of LED-related photophobia, a few simple tips can greatly improve any negative effects they may have:

Hopefully these tips help you better manage the pain and discomfort associated with LED lights in your daily environments.

1Main A, Vlachonikolis I, Dowson A. The wavelength of light causing photophobia in migraine and tension-type headache between attacks. Headache. 2000 Mar;40(3):194-9.

9Tatsumoto M, et al. Evaluation of the effects of an organic light emitting diode lighting environment for patients with migraine. Journal of the Neurological Sciences. 2017;381:946.