The symptom of photophobia and light sensitivity is not solely confined to the attack or so-called ‘headache’ phase for people with migraine—it can develop at any stage of the experience, leading to elevated pain and even acting as a trigger. This helps explain why photophobic people often describe hyper-sensitive responses to bright light just about all the time. In this post, we explore just how light sensitivity affects migraine patients at each stage of the attack. 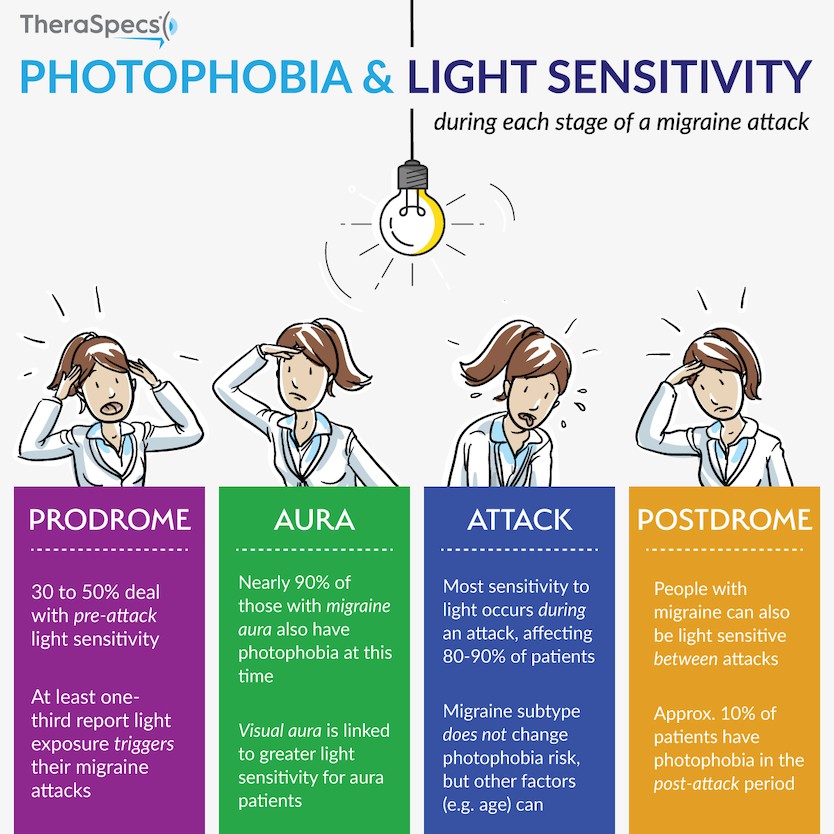 Some experts have suggested that sensitivity to one’s environment reflects the earliest signs of a migraine episode, supporting the belief that parts of the brain have become negatively activated at this time. For this reason, intense photophobia develops even prior to the onset of head pain and other typical symptoms. And research shows that approximately 30-50% of those with migraine have this sensitivity before an attack.1,2

However, light sensitivity can be more than just a symptom prior to the attack; it can function as a direct trigger for one as well. These factors vary greatly for each person, but general estimates support that at least one-third of attacks (but likely more) are brought on by light exposure.3 This indicates direct agitation of pathways between the eye and brain and is likely furthered by the overall lower tolerance for light inherent to people with migraine. In addition, premonitory photophobia has been connected to an increased risk that light will trigger migraine attacks too.1

Most people do not experience the aura phase, which is characterized by sensory disturbances that affect visual, motor or verbal function and occurs immediately prior to an attack. However, strong sensitivity to light still rears its ugly head for those who do have migraine with aura. Although there is much confusion about exactly what distinguishes a prodrome symptom, an aura disturbance and a trigger, studies have pegged photophobia as an issue for 88% of people with migraine aura. And there is a significant link between those who have visual aura symptoms (e.g. zig zag patterns, loss of vision, and starburst-like phenomena) and light sensitivity as part of their migraine attacks.4,5

The vast majority of the approximately 90% of light-sensitive migraine patients only endure photophobia during the full-blown attack phase. Here, they typically describe light exposure as an aggravating factor for their head-related pain and other symptoms, which often forces withdrawal to a dark room. Patients might also complain of eye pain and tearing, inability to open one’s eyes and/or excessive or impaired blinking. And these issues can occur for as long as the attack persists, sometimes for several days.

Additionally, very few differences exist between the type of migraine—such as vestibular or hemiplegic—and the likelihood of photophobia; since they all seem to share the same brain dysfunction, light sensitivity tends to just come with the territory. Certain comorbid disorders (e.g. dry eye or serious brain injuries) frequently co-occur with migraine and can complicate the presence of photophobia as well. Other factors, such as age, may mitigate the risk for some individuals, but it still remains a central feature of most migraine episodes.

As we mentioned, some people remain sensitive to light almost all the time. This includes the post-attack phase (known as the postdrome), where as many as one in ten continue to deal with photophobia. However, other studies have suggested that light sensitivity occurs less frequently in favor of other symptoms like brain fog and fatigue.6,7 Regardless, the lines can become heavily blurred between the end of a photophobic episode and the beginnings of another attack. Unfortunately, this cycle of ongoing sensitivity to the environment can lead to auxiliary effects, such as greater risk for anxiety and challenges with personal and professional obligations.

As we have shown, light sensitivity is not just a ‘one and done’ symptom that affects people only during their attacks—it makes everything a little bit harder before and after as well. One of the best remedies to deal with migraine-related photophobia is to try precision-tinted migraine glasses that filter the most harmful wavelengths of light. We encourage you to learn more about how they work by clicking below.