The first days and weeks following a concussion can be really scary. Many people experience symptoms that they have never felt before, such as light sensitivity, which may persist into and beyond the recovery process. Sara had endured her concussion at the beginning of 2020, and this led to the onset of daily headaches and mental fogginess, among other problems. She seemed to get her symptoms under control through medication, but the COVID-19 pandemic set her back in unexpected ways.

"With significantly increased screen time during the pandemic, I started suffering from daily headaches towards the end of 2020," she said. "I was able to deal with this for many weeks, but one morning I woke up and felt like I was drugged. This brain fog persisted for weeks, and the headaches simply would not go away."

Sara is certainly not alone in the negative outcomes that the COVID-19 pandemic has caused. In the first few months of the pandemic, we found that nearly 60% of people who were spending more time in front of their screens also had a rise in symptoms—specifically headaches, migraine attacks, light sensitivity and eye pain, among others. The amount of screen usage, along with the brightness of the light and exposure to triggering blue wavelengths, are all possible explanations for this increase in symptoms.

Meanwhile, Sara struggled performing simple, day-to-day tasks such as working on a computer, because of her symptoms. After finally scheduling an appointment with her neurologist, blue light filtering glasses for concussion emerged as a potential remedy for her light sensitivity and headaches. However, Sara quickly learned that not all blue light glasses are effective, let alone even target the right wavelengths.

"Although I ordered two pairs from Amazon and had been wearing them daily for weeks prior, no relief was had. My provider suggested TheraSpecs as a trusted brand of blue light blocking glasses," she told us. In particular, TheraSpecs block the most harmful wavelengths (near 480nm) that can aggravate light-sensitive brains, especially after a brain injury.

The reviews from other customers like Sara on the TheraSpecs website cemented her own willingness to try them, although she acknowledged that a little bit of skepticism remained. She ultimately purchased one of the most popular frames, the Classic style, with indoor lenses that are designed to combat this problematic blue light from screens and other artificial sources. And, after just over a week, she started to feel the relief that TheraSpecs (and her neurologist) had promised! 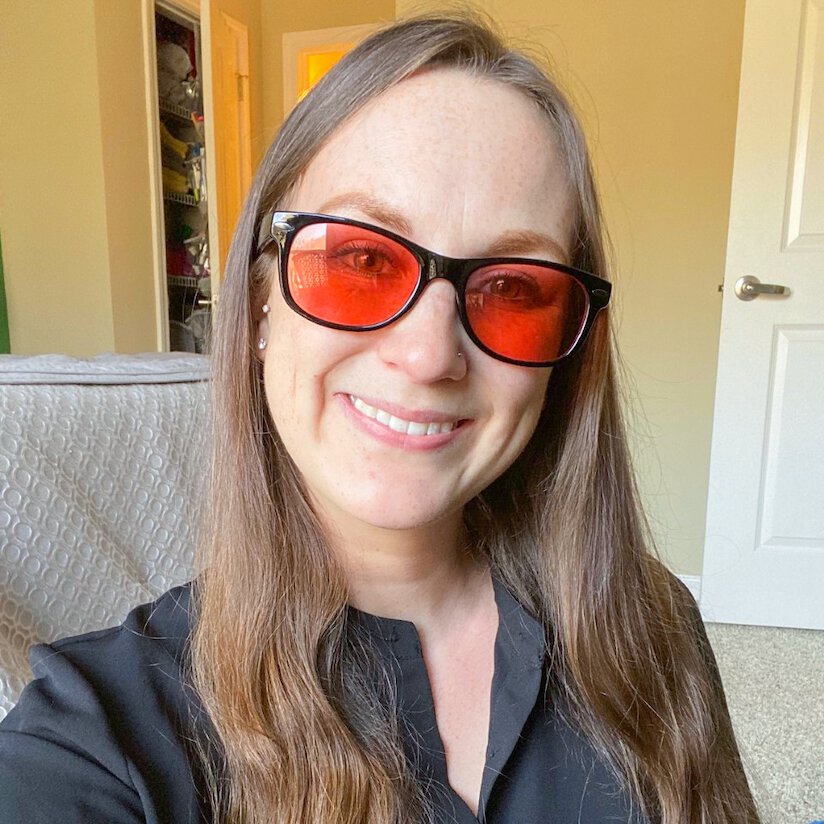 "I now wear my TheraSpecs daily and have noticed a significant reduction in headache frequency, duration and intensity, and I no longer feel like my head is in the clouds. I HIGHLY recommend TheraSpecs to anyone suffering from post-concussive syndrome, headaches, migraines and really anyone else that spends a good chunk of their day looking at a screen."

She also was impressed with the company’s personal connection to its customers and the way their customer care team supported her. As a result, she has been singing the praises of TheraSpecs to others who might benefit, and she thanks our team for changing her life after her injury!