As frustrating and painful as the acute migraine attack can be, the totality of other symptoms that occur before, after and between it often serves to add on to the tremendous burden faced by patients. Even when the worst of it has passed, people with migraine can experience a separate phase of the attack, during which they can have residual migraine symptoms or develop new ones. This stage, known as the migraine postdrome, is detailed below.

Migraine, by its nature, is a fluid process—symptoms can be inconsistent between episodes, triggers may not be easily or reliably identified, and it can be difficult to distinguish when one phase of an attack ends and another begins. The postdrome or post-attack stage presents similar challenges because it can all feel like one long experience for patients with very little reprieve.

Researchers have narrowed its definition down to describe the period from when the headache and other primary symptoms end and when the patient feels "back to normal."1 Others have tried to further delineate a true postdromal phase from the persistence of migraine symptoms after the head pain resolves—in which the latter is still considered part of the core migraine experience.2 However, even these descriptions are flawed because some migraine patients do not have typical headache pain AND residual headache can manifest during a postdrome too. 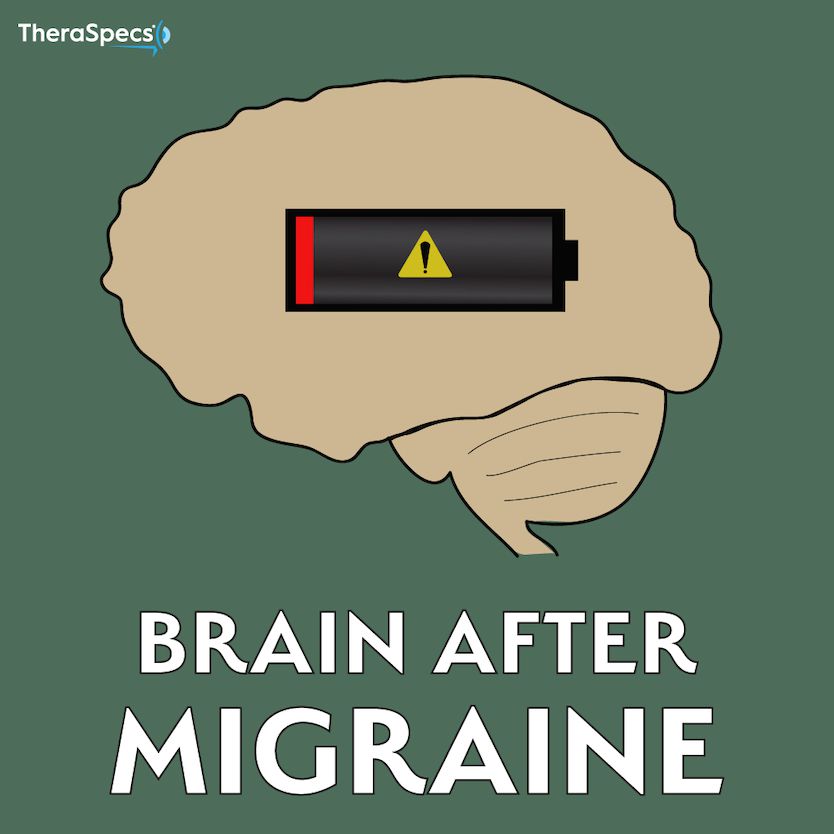 As a result, experts explored the neurological processes to see if they could identify changes in the body or brain that would indicate why it occurs. One study noted specific regions of the brain became active during the pre-attack (called the 'prodrome' stage); given that the prodrome and postdrome share similar symptoms, many have theorized that the brain may respond in the same way after the attack.3 This is consistent with other beliefs that the brain and body are still in a hypersensitive or active state even though the recovery process has begun.

However, a group of clinical researchers led by Dr. Peter Goadsby may have identified something that is unique to the post-attack period. Specifically, they discovered that there was a significant reduction of blood flow to most areas of the brain, which could account for some of what patients go through in the postdrome.8 Still, the exact mechanisms remain unclear and more study is needed.

So ultimately how do we know if what we’re going through is a legitimate migraine postdrome? Patients and medical professionals must typically look at the unique symptoms and experiences that occur.

Among survey data and direct clinical observation, between 68-97% of people with migraine have postdromal complications. Approximately two-thirds of those unfortunately endure these issues for almost all of their migraine episodes too.4-6 If there is any good news, it stems from the fact that this phase of the attack does not usually last as long—anywhere from a few hours to less than 24 hours for most patients—and it is less limiting than the primary symptomatic period too.5,7

No link has been established showing that the severity or duration of the full-blown attack is connected to the experiences in the postdrome, although people with migraine with aura may have a slightly longer duration. In addition, several independent factors have emerged as possible risks for increasing the likelihood of its development. These include:6

Those all probably look familiar given that they are hallmark features of the main migraine experience. This may indicate that the postdrome is simply more likely if your migraine disorder falls within predictable or ‘typical’ boundaries (if there is such a thing). It may also help partially explain why other headache disorders—like cluster headache, for example—may be less susceptible to the pain of the postdrome.

How’s this for a statistic: an astounding 255 non-headache symptoms were described among a group of 40 migraine patients in just one study.7 TWO HUNDRED AND FIFTY-FIVE! Although many of these likely mirrored one another (due to subtle variations in how they were described and recorded), it still speaks to the incredible physical impact of the postdromal phase of migraine. Six has been reported as the average number of symptoms, but they range from 2 to as many as 11 in some patients.

These physical complaints generally fall into four different categories: cognitive or mood; sensory sensitivity; stomach-related issues; and systemic. Among the most common were fatigue/lack of energy (68-75%), residual headache pain or tenderness (33-35%), and concentration impairment or brain fog (11-67%). Below is a fuller picture of the wide range of symptoms.4,6-7


Beyond these, you might also have to deal with nausea or vomiting, more frequent urination, difficulty forming speech or reading/writing, eye pain, sensitivity to sound—the list literally goes on and on. And very little difference has been observed between children or teens with migraine and adults with the headache disorder.2

What Can Patients Do?

The migraine postdrome can feel weird or even different, but it is important to remember that it actually is a normal part of the process. Whether it is the last and lingering phase of the attack or the earliest beginnings of a recovery, the basics of migraine treatment still apply.

Rest, hydration, trigger management and other forms of self care all remain key aspects to help you feel back to normal. You do not need overexert yourself simply because the primary pain phase has passed and people might expect it from you. Allow your brain and your body to recover in due time. In addition, you want to maintain a delicate balance with your medications and work with your doctor or specialist to continue the healing process without risking rebound headache phenomenon.

Migraine During Childhood or Adolescence

Migraine in Adulthood and Middle Age

Migraine in the Elderly