Not only can migraine progress from youth into adulthood, but a large majority of people with migraine actually develop the headache disorder in their adult years too. In the second part of our series, we look at the ways in which migraine manifests for adult men and women in the prime of their lives.

Migraine Prevalence and Risk for Adults

Migraine is most commonly diagnosed in people between 25 to 55 years old, with some experts noting its peak between 30-39 years of age.1 It is at this time that it starts to decline every decade thereafter, although the impact is no less felt by patients. Interestingly, unlike those who deal with the primary headache disorder in childhood, the onset of migraine in adulthood is less likely to be associated with a genetic or familial cause—although it is still a possible explanation.4

Women are increasingly more likely to be diagnosed.

As noted in our exploration of childhood migraine, women start to supercede men in migraine-related diagnoses starting as teenagers, and this gap continues to widen as patients get older. In fact, of those adults with migraine, nearly 85% are women. Hormones are thought to be one of the main contributing factors to the onset of migraine in adult-aged women, although it is one of many potential causes.

It is also during these years that we see the worsening of migraine, according to research. In fact, the number of "headache days" has been shown to increase year after year, reaching its peak in late adult life. This coincides with the transformation of episodic to chronic migraine for many adults as represented by an increase in the number of migraine attacks.2 Although it is unclear exactly why this occurs, risk factors include: medication overuse; high body mass; and the presence of emotional symptoms like depression.

There are others risk factors for migraine.

Individuals who serve in the military and professional athletes who both sustain head injuries as well as those with comorbid conditions (such as fibromyalgia) are among those who have a greater likelihood of being diagnosed with migraine during this stage of life as well; this is a direct result of their line of work or existing health issues.

Other Types of Migraine in Adults

Migraine without aura is the most prevalent form of the headache disorder, but it is not the only one. Much like young children, vestibular migraine remains the most prominent cause of recurring vertigo in adults and may account for approximately 10% of all migraine diagnoses.5 Typical aura without headache is another rare subtype brought on in the adult years, although it only affects less than 3 percent of all sufferers. Hemiplegic migraine also can be identified in a small percentage of adults, although it is believed to develop more frequently in childhood.

Does migraine change our brain as we age?
This is a tough question to answer. Not only do we often see increasing chronicity for people with migraine, but researchers have found that there is an increase in white matter abnormalities (which can lead to functional and behavioral problems) as well as brain lesions known as infarct-like lesions (which can hasten cognitive decline and even dementia). More recently, experts have found accelerated thinning of certain areas of the cerebral cortex that is unique to people with migraine; given the specific locations where this occurs (particularly in the areas of pain and sensory response), it may suggest a diminished ability to manage migraine symptoms as patients age. However, these findings are still controversial.6

Does having migraine as an adult increase the risk for other health issues?
Cardiovascular problems, such as stroke and heart attacks, have been known to be higher for adult-aged and older people with migraine—especially for someone who regularly experiences aura—when compared to healthy individuals.7,8 There is still intense debate about whether or not these findings are directly tied to migraine changes or whether other factors may be at work.

Far more convincing evidence has identified a link between adulthood migraine and emotional side effects like anxiety, panic disorders and depression.9 These also tend to get worse with a higher symptom burden. (Note: you can read our article about light sensitivity and anxiety here)

It is important to work with your doctor to determine your personal likelihood for these other conditions.

How does pregnancy impact migraine in adult women?
Curiously, migraine attacks tend to diminish in frequency or stop altogether for 60-70% of pregnant women during childbearing years. This happens most often during the second or third trimester. A smaller percentage can deal with worsening headaches and migraine attacks, but it is much rarer. Of course, pregnant people with migraine must also deal with changing treatment methods, led by concern over the side effects associated with pharmacological options.10

Of course, these symptoms can and are often reported at any age, but again they tend to peak early on in adult life. However, there is a bit of good news: many of these symptoms tend to soften in intensity if not outright disappear in the later stages of life—particularly after the age of 50 years.3 We’ll discuss this more extensively in our elderly migraine analysis. 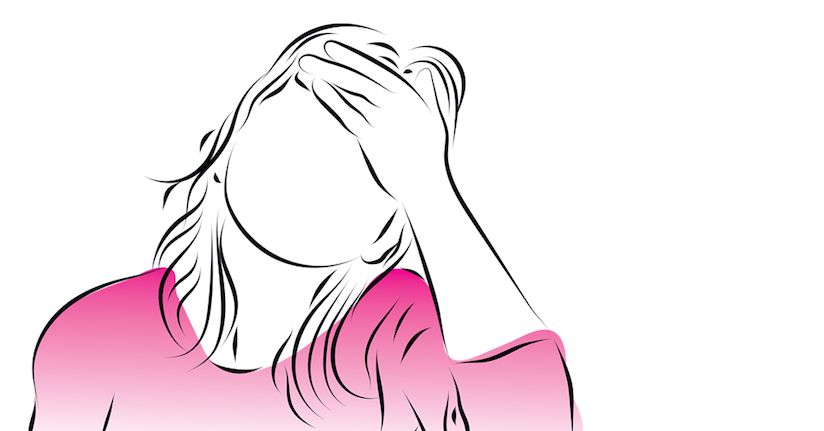 It is also during this time that many adults with migraine begin to notice specific stages of their attacks. The prodrome or pre-attack phase typically occurs 1-2 days prior to migraine onset, with symptoms including things like constipation, mood changes, food cravings, neck stiffness or changes in thirst and even excessive yawning.

For about one-third of patients, they may present with an aura—which is a sensory or visual disturbance—within an hour prior to migraine onset. Interestingly enough, the percentage of people who have an aura tends to increase with age, with those over 70 years perhaps representing the largest percentage of patients who experience aura. Ironically, if you develop an aura in childhood or adult, the number of attacks that are accompanied by these disturbances may increase. Symptoms that may occur with an aura include:

The actual attack phase of a migraine is where the brunt of a patient’s symptoms manifest. Head pain is at its worst during this period, although there are many who do not experience any headaches at all—but the other symptoms are present (e.g. light sensitivity, dizziness, etc.). Attacks can last anywhere from a few hours to several days or even longer; in fact, the diagnostic classification of migraine includes the requirement of attacks that are 4 to 72 hours in duration.

If you have ever felt confused or lethargic after a migraine attack, you are experiencing the final phase of the episode: the postdrome. And it is a common complaint from many adults. Specific postdrome or post-attack symptoms can include:

Like symptoms, adulthood migraine triggers will vary from person to person, between episodes, and by the specific type of migraine. For instance, migraine with aura may have a unique set of triggers when compared with those who do not have an aura. However, there are several things to watch out for:

It is highly recommended that adults with a headache disorder record their experiences thoroughly in a written or electronic journal. This migraine diary can help identify trends in your specific triggers.

We are particularly interested in how patients with migraine encounter light sensitivity, or photophobia as it can also be called. The fact is it is a leading symptom after only headache, perhaps affecting up to 90% of adults during their attacks. It can occur during any stage of the episode, and it is believed to be caused by fluctuations in the brain (which are a part of the migraine disease) that lead to diminished threshold for external sensations—in this case light. This also helps explain why many feel sensitive to bright light even outside of the acute attack period.

Additionally, photophobia may be an indicator that light is a trigger. Specific wavelengths of blue light, between 480-520nm, have been shown to cause individual migraine episodes, which explains why fluorescents, sunlight and other artificial sources are particularly troubling for adults with migraine.

Effect of migraine on quality of life for adults

Migraine is perhaps one of the highest causes of disability for people under the age of 50 years old.11 It affects work attendance and performance, interpersonal relationships with friends and family, and has a dramatic impact on a person’s health. It also keep patients from the activities that they would rather be doing—from spending time with loved ones to attending concerts and so much more.

These negative consequences of migraine also tend to be more pronounced with for those adults with more symptoms, additional comorbidities and a higher number of attacks. In short, migraine has devastating outcomes for those who deal with it every day. 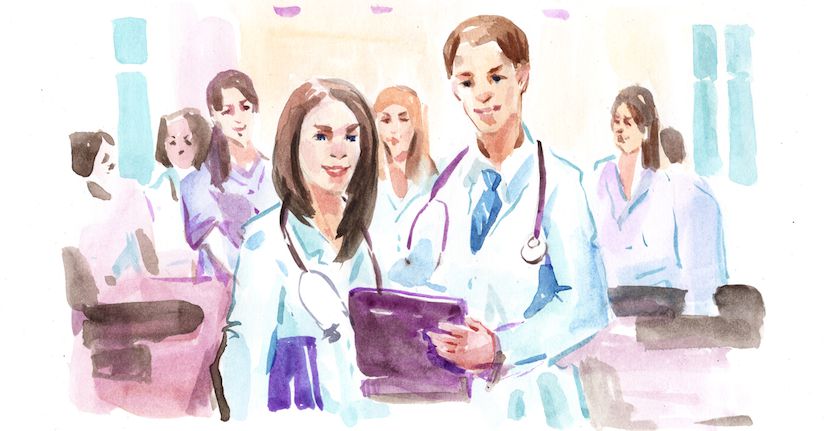 Migraine treatment depends on several factors and treatment plans may be individualized. Some of the treatments of migraines in adults include things like over-the-counter and prescription pain relievers, medications to dilate blood vessels and block pain, caffeine combination drugs and medications to treat symptoms of nausea and pain.

One of the more exciting developments in headache medicine concerns new CGRP drugs that are designed specifically for migraine prevention. Prominent headache specialists like Dr. Amaal Starling have labeled it a "new era" for patient treatment. Aimovig is the first of these medications to hit the market and be approved by the FDA; early results have been promising, but there are still questions about long-term effectiveness and possible side effects. But still, patients have reason to be optimistic.

Some may find relief in alternative therapies, such as:

Trigger management also remains a core component of migraine relief for those instances where targeted therapies are not enough.

Part 1: Migraine in Childhood and Adolescence

Part 3: Migraine in the Elderly