The answer to why light can trigger pain responses lies in the relationship between the eye and the brain. There are many complex interactions that take place from the moment that light is absorbed through the eye and processed into painful light sensitivity, also called photophobia. In this post, we do our best to break down the science behind how this occurs and explain the possible causes of photophobia.

We know that chronic photophobia is most commonly attributed to some type of underlying condition: migraine, traumatic brain injury, dry eye, glaucoma, and countless others. Not surprisingly, abnormal processing or dysfunction within the eye and/or brain are hallmark features of these disorders. In turn, this often amplifies the effects of light and other stimulus (noise, touch) and likely underscores why people with these conditions are far more likely to experience regular bouts of photophobia when compared with healthy individuals.

But the truth is anybody can have a negative reaction to excessively bright light—it is why most of us put on dark, polarized sunglasses on a sunny day. We know that feels unpleasant, and so that must mean there are certain pathways involved in photophobia that we all share, and which may be further impaired for those with one of these conditions. For that, we begin by exploring the systems within the eye where light is first introduced.

Light Perception in the Eye

How the eye perceives light is critical in the development of photophobic pain. Rods and cones in the retina—which are central to vision—have been shown to reach certain parts of the brain that affect pain via the optic nerve. Naturally, dysfunction or hyperreactivity within these ocular systems can result in photophobia.1,2 Even outside the main visual pathway, evidence suggests that there is increased, even abnormal, activity in retinal cones for people with migraine.3 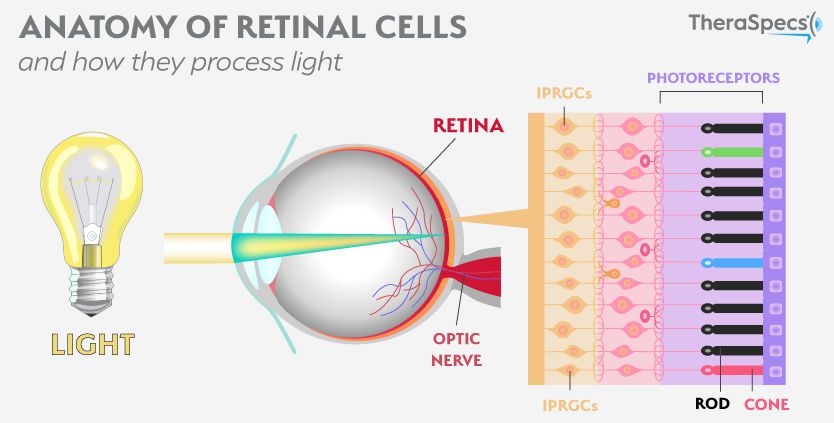 However, the big discovery came from researchers who identified a separate set of cells in the eye called intrinsically-photosensitive retinal ganglion cells (IPRGCs). As you can probably guess by their name, these cells are naturally sensitive to light because they contain a photopigment called melanopsin. Light stimulates this photopigment, which sets off a chain reaction of behavioral responses—everything from how our pupils react to the suppression of melatonin which affects our alertness and sleep cycles.9 Since IPRGCs also link directly to pain centers in the brain, they can bring on the photophobia that many experience. In addition, they do not contribute to visual processing, meaning that even a blind person can develop this strong sensitivity to light.4

Furthermore, these cells are most sensitive to blue and green light wavelengths between 480 and 520 nanometers. This represents a significant portion of the visible light spectrum to which we are exposed every day through artificial sources like fluorescent light and computer or smartphone devices. So you know the headache or eye discomfort you have from staring at a screen all day? These cells are the likely culprit for why you feel light sensitive! It is also why specially-tinted photophobia glasses that filter out these wavelengths are the best tool for fighting the symptom.

However, they are also activated by other inputs, which means a person can experience photophobia from exposure to wavelengths other than blue or green.5

Pain Sensations in the Brain

The brain represents the other half of the photophobia equation. The symptom definitely has a neurological origin for a majority of patients—perhaps validating its frequent occurrence among people with most types of migraine, other headache disorders, and brain injuries. This makes logical sense too; generalized light exposure is not inherently painful for most of us, so there must be certain pathways that translate light sources from the eye into the sensations and symptoms of light sensitivity that we experience.

Specifically, researchers have identified two of these brain-related causes of photophobia, which include: 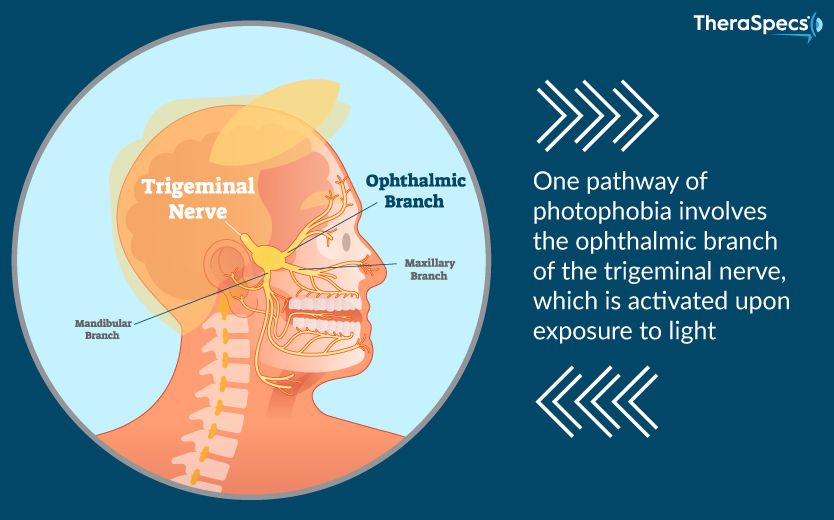 The first source of light-triggered pain revolves around the trigeminal nerve. This particular nerve is the largest in the brain and controls sensory information as well as movement functions in the face and head. Recently, scientists discovered that light transmitted through the retina of the eye engages nerve fibers in one branch of the trigeminal system. This process leads to a dilation of blood vessels and ultimately flips the “on” switch for photophobic pain.

Migraine has been specifically implicated in this process, but the eye is also extensively innervated by the trigeminal system and is therefore sensitive to pain; this may offer a possible explanation for why patients with an eye-related disorder (e.g. dry eye) also complain of photophobia. Trigeminal stimulation may also be partially responsible for the “blink reflex,” which can lead to the development of photophobia if impaired (such as with blepharospasm). Even meningitis-related light sensitivity—which is believed to be brought on by swelling in certain parts of the brain—can spur reactions in the trigeminal nerve. 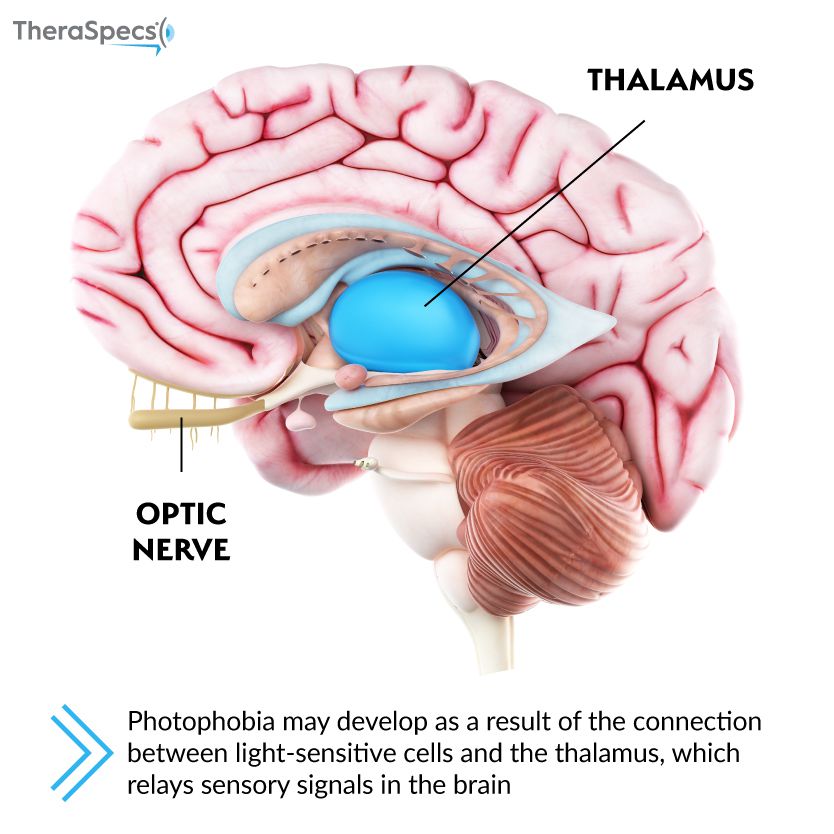 The second pathway reflects a direct connection between light-sensitive IPRGCs in the eye and the thalamus. The thalamus is located deep within the brain and manages pain perception along with consciousness, sleep and alertness.6 Its neurons fire in response to the light exposure as well as the trigeminal pain sensations that are also activated; this creates the feeling of discomfort brought on by bright lighting. Blepharospasm patients are just one group of patients that have documented activity in the thalamus upon exposure to light.1

It is also important to remember that these are only two possible pathways; not only might they both influence one another in the onset of photophobia, but there may be other causes that have not yet been identified.

Other factors that affect photophobia

As we mentioned, people with chronic photophobia often have an underlying condition, which can lead to other deficits or dysfunction. Consequently, this can further stimulate photophobia responses—making it a relentless cycle. For instance, people with migraine are known to have a lower threshold for light, and studies are beginning to recognize this as a likely feature of other conditions as well, notably post-traumatic headache or post-concussion syndrome.8 This ultimately means that the source does not have to be considered “bright” in order to bring on photophobia.

Similarly, an imbalance of dopamine in the brain may also compromise a person’s ability to tolerate their environment. Dopamine is a chemical signal sent between brain cells that can affect our sensory experiences. In 2017, University of Michigan researchers recorded that people with migraine had significantly lower levels of this brain chemical during attacks—thus offering a possible explanation for their external sensitivities to light, sound or touch. Ironically, their levels between episodes were comparable to non-migraine participants.7

In addition, there may be a cumulative effect of light exposure; this could explain why people are more light sensitive during summer months—when the days are longer—than winter months. Furthermore, people who wear sunglasses inside on a regular basis to relieve their photophobia may have additional complications. They might find that they are more sensitive to light when they remove their sunglasses because their retina has been dark adapted, which creates an even stronger response to light.