Note: This type of migraine can run in the family (familial hemiplegic migraine) or develop spontaneously (sporadic hemiplegic migraine). Although there are subtle differences in how patients experience their attacks, the vast majority of symptoms occur consistently for either type. 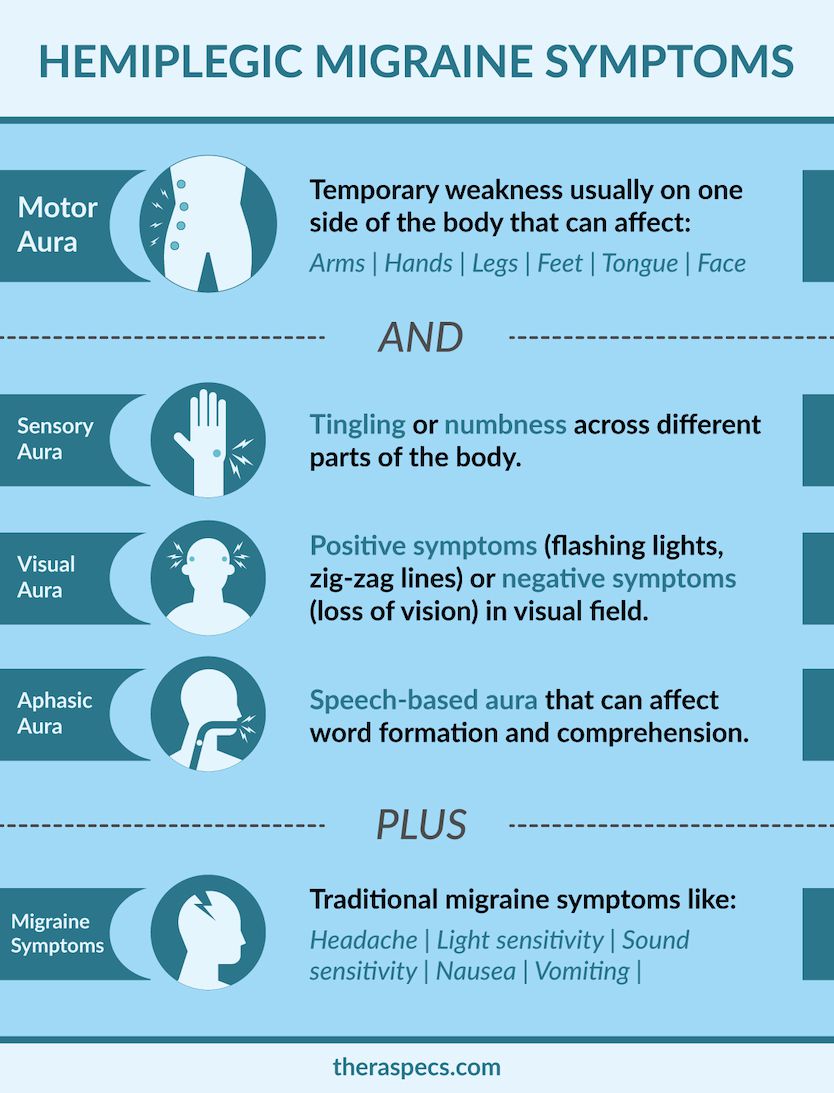 As we mentioned, hemiplegic migraine is largely characterized by the aura stage that precedes the full attack. And it is not just a singular aura symptom either. Instead, this type of migraine is associated with the most pre-attack (prodromal) and aura-based symptoms, with an average of five experienced by patients!1 Furthermore, these issues can look different than typical migraine with aura. Broadly speaking, four types of aura symptoms can manifest:

--and at least one of the following additional aura symptoms--

MOTOR AURA includes the most identifiable pre-attack symptoms of hemiplegic migraine; it is typically defined by weakness on one side of the body and is part of the diagnostic criteria for the headache disorder. These symptoms most often affect the hands and arms, but can also impact the face, legs and feet for more than half of patients. Many describe the feeling as comparable to a stroke, but it is important to recognize that this motor weakness in hemiplegic migraine is fully reversible, although it can last for several hours. In addition, many with the disorder can have attacks without motor aura—so, although regular, it may not manifest every time.

In order for a person to be diagnosed with hemiplegic migraine, they must not only have motor aura, but any (or all) of the following additional aura experiences. SENSORY AURA mirrors bodily weakness, but experts distinguish it in terms of two basic physical feelings: tingling or numbness. Although they are different sensations from motor weakness, they can be easily confused by patients and practitioners; this is due in large part to the fact that they equally manifest on one side and persist for hours at a time. Regardless, nearly all studied patients with hemiplegic migraine have sensory-based issues.

When people think of migraine aura, they probably relate most to VISUAL AURA. These symptoms manifest for about 90% of people with hemiplegic migraine. Some of the most common descriptions of visual aura include flashing or flickering lights, zigzag lines or even loss of vision—all of which usually precede the ‘headache’ or attack phase. Unlike motor aura, they can impact both sides of the visual field and do not typically last as long.

Lastly, APHASIC AURA dramatically influences a person’s speech and language. This type of aura has been reported by three-quarters of people with hemiplegic migraine, and appears most often as an inability to find words, impaired language formation or slurred speech. Julie described it this way for Migraine Again: "In 2010 I experienced an episode where I was reading to my daughter and my speech came out as gibberish. I knew what I wanted to say, but it didn’t come out of my mouth that way."

Comprehension difficulties may also show up during this time as well—which can partially explain the ensuing speech difficulties—but it is far less frequent (~10%). Further complicating matters, migraine with brainstem aura is another type that can cause similar speech symptoms prior to an attack. Ultimately, if you are dealing with any of these issues, you always want to seek appropriate medical care and receive an accurate diagnosis.2-4

As if that were not enough, hemiplegic aura can include other features as well. Patients have reported the following auxiliary aura symptoms:

And these are just the ones that occur frequently enough to warrant recognition in medical studies. As we all know, migraine attacks—including those of the hemiplegic type—vary from person to person and may have other side effects not included here.2-4

Of course, hemiplegic migraine has typical migraine symptoms that occur during the attack stage as well. This includes the following:2-4

The vast majority of people with either familial or sporadic hemiplegic migraine have head pain that follows the aura—perhaps as many as 95 percent. This places headache symptoms more likely than even other migraine types, including vestibular migraine. That said, the pain features follow similar paths; they can be unilateral (affecting one side) or bilateral (affecting both sides), are rated moderate to severe in intensity, and usually last at least four hours. Patients often describe it as a pulsating or tightening sensation in the head.

Approximately 87% of people with this migraine subtype have a strong intolerance for light as part of their attacks. Unfortunately, sunlight and other forms of bright light regularly trigger hemiplegic migraine episodes too—second only to stress.5 And why does light bother them? It is likely due to a combination of factors, from the general reduced tolerance for brightness observed in migraine patients as well as light-specific characteristics (blue wavelengths, light intensity, flickering). No matter the reason, photophobia takes a significant toll on those who live with it.

The environmental influence over hemiplegic migraine also extends to sound-related discomfort, called phonophobia. It equally strikes those with the headache disorder, and rarely occurs without the presence of light sensitivity because of the sensory activation inherent in migraine disorders. And sounds do not have to be loud in order to trigger or worsen migraine symptoms; as with light intolerance, patients may simply have a lower threshold for any type of noise. If you're interested in learning more about the connection between light and sound sensitivity, you can read our in-depth article here.

Also, although tinnitus and other hearing deficits can occur during the hemiplegic migraine aura phase, it is unclear if they have any direct connection.

Nausea also complements the multitude of migraine symptoms like sound and light sensitivity, impacting eight out of ten hemiplegic migraine sufferers. Although less frequent, vomiting unsurprisingly follows close behind for the more than 60% of people who deal with it. In many ways, these issues reflect the total physical burden that accumulates over the course of several hours during a hemiplegic migraine attack—from the motor and visual symptoms and even dizziness in the aura stage through to the unrelenting pain of the actual attack. This is why many experts see them as independent risk factors for migraine-related disability. If you further are not able to engage in optimal self-care practices during an episode (e.g. drinking enough water and/or eating), then it is easy to see why nausea and other stomach troubles can happen.

There are additional risks associated with hemiplegic migraine that must be considered, although we want to stress that they are significantly rarer. Epilepsy and seizures can occur for a small percentage of patients (~7%), and the usual emotional side effects of migraine like anxiety and irritation can join in as well. Curiously, evidence shows that more serious concerns such as coma risk and longer term brain disease may also be linked to hemiplegic migraine—but more research is needed in this area, and it should not cause undue worry for people with the condition.

Patients must also remember that the scariest symptoms associated with hemiplegic migraine are only temporary. It does not make them any less concerning or disruptive—particularly when they last for several hours—but they will ultimately dissipate. In addition, more and more resources exist for treating hemiplegic migraine, including new anti-CGRP medications that specifically target brain proteins known to cause attacks. Doctors and specialists in headache medicine can also help improve the burden associated with the auxiliary migraine symptoms described above. They can ultimately make living or working in a triggering environment easier to handle.

Top Triggers of Migraine with Aura