The process of migraine doesn’t just begin when the head pain sets in. In fact, it can start much earlier than most people might think with changes in the body and brain as well as the onset of unique symptoms and other experiences—all of which can signal that an attack is looming. We discuss in detail what happens in this premonitory phase of migraine, also known as the “prodrome.”

The prodrome represents the earliest phase of the migraine attack, occurring even before the onset of aura (for those that experience aura). For people that have a headache associated with their migraine attacks—which, as a reminder, is not the case for everybody—they will notice a grouping of symptoms that manifest several hours prior to their familiar head pain. In fact, the International Classification of Headache Disorders defines the prodrome as a symptomatic period that persists up to 48 hours prior to any head pain or aura symptoms. Further definitions have clarified that it begins no less than two hours before an attack, which makes room for the aura period.

Oftentimes, the pre-attack symptoms are unique, but as we’ll explain below, there is plenty of overlap with later phases as well; this creates a complicated picture of the differences between the four migraine stages. In addition, many patients acknowledge that they experience some of the most unusual changes during this time. In fact, one anecdote in a clinical review referred to a particular individual’s “almost uncontrollable tendency to laugh or sing or whistle or dance” prior to an attack.1

While that particular experience may not be typical, it still reflects the highly unique aspects of the prodromal phase. Even the brain has been shown to undergo distinctive changes in the earliest stages of a migraine, thus supporting its differentiation from the core attack or pain period. Specifically, researchers implicated activity in the hypothalamus, which regulates many bodily functions and may even explain the presence of specific premonitory symptoms like yawning and fatigue.2,3 They also believe that fluctuations in the neurotransmitter dopamine also occur during the prodrome, which has previously been linked to other migraine-specific events, notably the onset of sensory sensitivity that many endure during the acute phase. 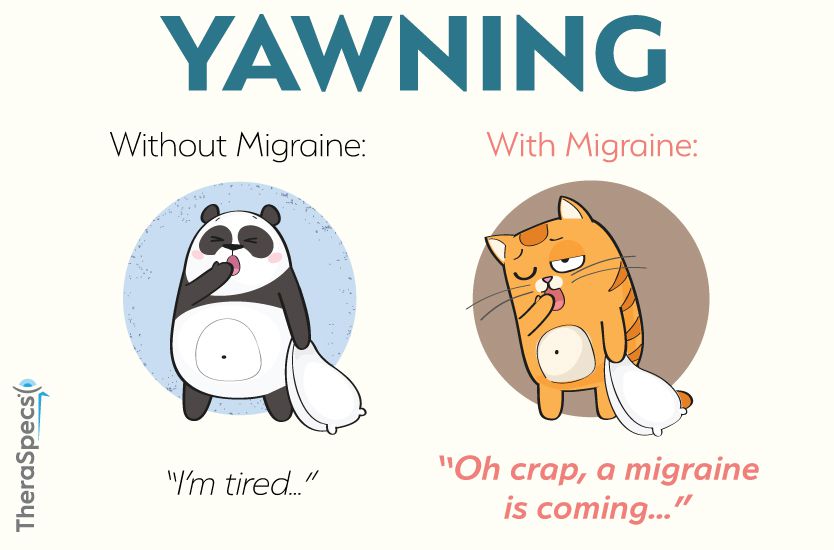 Furthermore, photophobia during the premonitory interval has been specifically linked to hyperreactivity within the visual cortex.4 Although this may not necessarily be unique to the prodrome, it still indicates that the brain undergoes numerous changes before the attack, some of which continue during the pain phase and beyond.

Prodrome vs other migraine stages

While we continue to learn about what actually causes migraine attacks, it remains difficult to definitively pinpoint where the prodromal stage ends and the next one begins, even with what we already know about the changes that develop in the brain. Further complicating matters is the relationship between sensory complaints like light sensitivity and exposure to external triggers such as bright light. As Dr. Andrew Charles described in a 2012 analysis: “...Many patients identify as triggers particular sensory stimuli to which they are already more sensitive because their acute migraine attack has already begun."5 In other words, it truly could be a chicken-or-egg phenomenon for people with migraine; did exposure to triggers lead to the prodrome or did the onset of the prodrome—and therefore the attack itself—make them more susceptible to their usual triggers?

Additionally, many report they have sensitivity to light and sound (among other symptoms) prior to and during the attack, and sometimes even persisting to the postdrome or post-attack period. This has led some experts to consider eliminating photophobia, phonophobia and nausea from the list of premonitory issues because they believe them to be indicative of the headache phase.6 Once you include migraine-related aura—which is often visual in nature and similarly occurs prior to the onset of pain—and things get really entangled really quick.

In attempt to make things clearer, we’ll include some key definitions below to help distinguish between these stages and experiences:

Migraine triggers: Internal or external factors that, upon exposure, are likely to bring on a migraine attack.

Prodrome phase: Symptomatic period occurring before the onset of pain (for migraine without aura) or aura symptoms (for migraine with aura). Identifiable symptoms might include fatigue, yawning, mood changes and gastrointestinal complaints.

Aura phase: Precedes the acute attack period by no more than 60 minutes and features visual symptoms (e.g. floaters, scintillating scotoma and/or visual snow) as well as other sensory symptoms (e.g. inability to speak clearly or tingling).

Regardless of the definitional challenges, there appears to be enough differentiation such that those with frequent migraine attacks are often able to recognize the prodrome as the start of the migrainous process and can prepare for the likelihood of an attack to follow. And in many cases, they are able to successfully utilize intervention methods to prevent it or reduce its duration and impact.

There is one fundamental truth that both researchers and patients (mostly) understand about migraine: there is incredible variability in experiences, both among individuals and between attacks. The same can be said for the prodromal phase, with studies ranging from as little as 10% of people with migraine having pre-attack symptoms to 80% or more in other analyses.1,7 More research is needed around childhood migraine and the prodrome—which is further compounded by challenges for younger patients in identifying and communicating their symptoms—but perhaps up to two-thirds have a premonitory phase in advance of an attack.7

The vast majority of those who do experience this stage of migraine report more than one symptom, with an average of 2-3 for many. And in one study alone, they identified 32 different physical or emotional complaints across the study population! In that same analysis, it was revealed that the duration also can be highly variable as well. Approximately 45% had prodromal symptoms for less than one hour, but the average duration among all patients lasted more than 6 hours. And some even went longer than 12 hours.8

Specific risk factors may also impact the symptomatic burden of the premonitory phase, such as:9

Similarly, the presence of migraine with aura and/or hemiplegic migraine appear to be risk factors for prodrome among children with the headache disorder.10

Unfortunately, the presence of the prodrome also has been linked to negative outcomes outside of this stage. In fact, people who had regular pre-attack symptoms were also more likely to have an increased number of total migraine triggers and experience sensory-based triggers, such as light, weather, stress and not eating. Moreover, every other phase of migraine (aura, headache and postdrome) was longer in duration, thus extending the discomfort patients have to endure.8

Here is a sampling of the leading symptoms that people with migrainous prodrome have to deal with:


Other noteworthy symptoms include: facial changes (especially for pediatric migraine), restlessness or excess energy, thirst and sleep problems. Specific migraine diagnoses may also influence the prodromal experiences; for example, as many as one in ten patients with vestibular migraine have dizziness or vertigo before an attack, which may be higher than other types of migraine.11

And again, there are countless more that are not listed here that may be part of your migraine prodrome. In fact, one of the limitations of numerous studies is that researchers often pre-populated a list of symptoms. As a result, it wouldn’t surprise us if the total number of reported issues compared favorably to the number of raw POST-attack symptoms at two hundred and fifty-five.

Taking care of yourself during the migraine prodrome

The one encouraging factor of the migraine prodrome revolves around the timing. Since it occurs several hours prior to the onset of an attack, patients have time to use every resource in their treatment toolkit to prevent it or reduce its impact. Taking your acute medications right when you feel those premonitory symptoms develop—especially when it is two hours or more prior to the attack—significantly increases the likelihood of prevention. Even among those headache and pain phases that did occur, the intensity was considered milder.1

Not only is medication important, but other therapeutic interventions and behavioral changes can improve the odds. Since the early stages of a migraine may lower the threshold for other triggers or external stimuli (such as bright light), limiting your exposure to these instigators can be helpful. While avoidance may not always be possible or even desirable, products such as ear plugs for sound sensitivity or migraine glasses for photophobia can build up the tolerance and not further hasten the attack.

Migraine During Childhood or Adolescence

Migraine in Adulthood and Middle Age

Migraine in the Elderly