It is natural to think that the main distinction between vestibular migraine and more typical migraine variants is the presence of regular vertigo during attacks. And while that is certainly a leading indicator, additional vestibular and migraine symptoms can impact people as well. In this post, we list the most common symptoms of vestibular migraine. 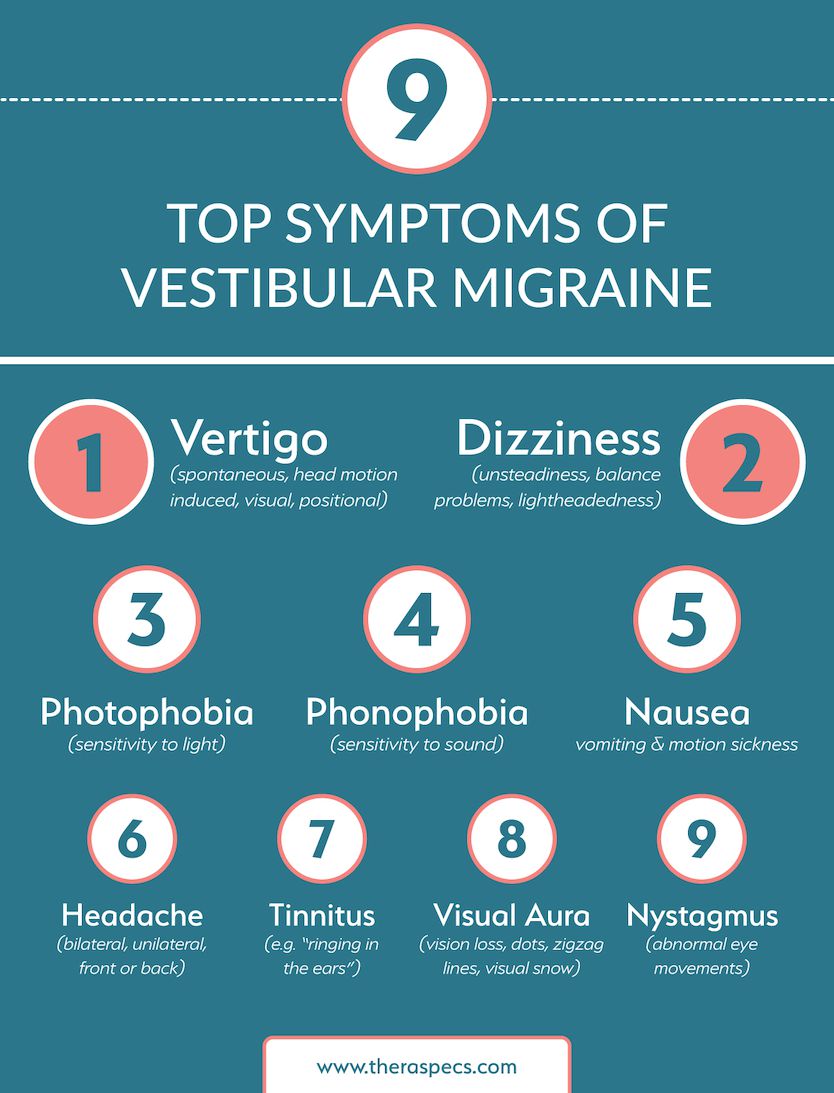 In order to be diagnosed with vestibular migraine, you need to have persistent vestibular disturbances that occur with your attacks, and you can usually expect there to be two or more. In the diagnostic criteria for the disorder, these symptoms typically last anywhere from a few minutes to several hours. Vertigo may be the most recognizable of these physical impairments, but even that can manifest in multiple ways:1,2

➜ Spontaneous vertigo represents a non-triggered sensation of spinning or other false movement and occurs in as many as 83% of patients.

➜ Triggered vertigo can result from exposure to visually-disorienting environments or through direct head movement; at least four out of every ten individuals experience either of these, but it is likely closer to eight in ten.

➜ Positional vertigo occurs less frequently but still affects up to two-thirds of people with vestibular migraine; it manifests after a change in the position of the head.

You might also be surprised to learn there is a distinct difference between vertigo and dizziness. Many patients might say they “feel dizzy” to describe those spinning or vertiginous sensations, but dizziness has its own symptology independent of vertigo; several of which may actually be among leading vestibular complaints in their own right. They include:3

Other, less frequent issues can include visual lag (the perception that the environment belatedly adjusts to eye and head movements) or general disorientation.3

There is some encouraging news for those with vestibular migraine. Although vertigo and dizziness persist years—even decades—later, the regularity of these symptoms has been shown to decrease over time. Additionally, less than half of individuals reported that their vertigo issues continued to be severe and/or debilitating.4 This may align with an established trend related to the overall decline of migraine frequency and severity as patients age; it may also signal greater effectiveness of treatments in reducing migraine burden.

As with other types, vestibular migraine features many of the same hallmark symptoms of other headache disorders. Experts have even suggested that people often go several years with typical migraine with or without aura before being diagnosed with vestibular migraine or even experiencing any vestibular symptoms!1 This makes patients intimately familiar with the usual migraine suspects:

And these specific migraine-like experiences can look a little bit different for those with the condition, which are outlined in detail below.

It is not inconceivable that nine out of every ten people with vestibular migraine also experience painful sensitivity to light, commonly known as photophobia.2,5 This puts it on par with other migraine types, such as hemiplegic or migraine with aura. Even if the actual percentages make it less prominent, this sensory sensitivity is still a disruptive force for the vestibular patient—affecting their ability to participate in activities and/or worsening pain or other symptoms. In addition, any type of bright light (like fluorescents) is a top trigger of vestibular migraine attacks for more than half of patients, if not more.2,3 That makes lighting hard to escape at any stage of an attack for those intolerant of it.

Given the shared biological connections between photophobia and phonophobia (or sound sensitivity), it should come as no surprise that they regularly affect vestibular migraine patients at similar rates. At minimum, it appears at least half of those with the disorder deal with phonophobia during the majority of their attacks. Similarly, it appears sensitivity to sound may slightly diminish with age, but it still remains a core feature of vestibular migraine years later.4,5 Ultimately, these kinds of sensitivities reflect the overall influence of central nervous system dysfunction in the onset of migraine symptoms.

Between 30%-80% of those with persistent migraine vertigo get the nasty side effects that come with those sensations, notably:1,6

Is is unclear if these are the result of experiencing vestibular disorientation or if they are a complication of migraine, but it does not make them any less unpleasant. Curiously, motion sickness has separately been identified as one of the two biggest precursors to the onset or diagnosis of vestibular migraine—the other being the prior existence of migraine attacks and/or a family history of headache disorders.2,5

Separate studies have indicated that approximately half of vestibular migraine attacks directly include head pain—yet another reminder that migraine is not just a headache!2,3 The pain is generally located on both sides of the head, either centralized in the temples or at the back of the skull; however, it can occur unilaterally for some. In addition, the vast majority (~80%) have headaches that last 24 hours or less.5 Unfortunately, years after being diagnosed, head-related pain continues to affect a large majority of sufferers.

Tinnitus is often referred to as a ‘ringing in the ears,’ but in fact it can be any type of phantom sound heard in the auditory system. Perhaps one-third or more may have to deal with this issue on an ongoing basis during their migraine-related vertigo attacks.2,6 The overlapping and often confusing connection between vestibular migraine and Meniere’s disease (which affects the inner ear and can also lead to vertigo and migraine-like symptoms), may enhance the risk for tinnitus as well.7

Although visual aura typically precedes a migraine attack, it still must be considered within the framework of the entire vestibular migraine experience. This temporary disturbance within the vision affects approximately 25% of those with migraine-related vertigo, and it can appear in a variety of ways:5

These visual experiences start within the center of the visual field and kaleidoscope outward in the minutes before the full-blown migraine attack begins. In addition, there may be a greater risk for vertiginous symptoms associated with migraine-related aura, although that may not immediately indicate a higher likelihood for definite vestibular migraine.8

Nystagmus refers to uncontrolled movements of the eye, which can be brought on by a specific trigger (such as moving or shaking of the head and eyes) or completely unprovoked. Although it affects fewer individuals with vestibular migraine—around 20% or less—it can occur during an attack and can indicate clear dysfunction in the vestibular system.2,9 This makes sense too when you consider that vertigo/dizziness, impaired ocular functioning and symptoms like blurry or distorted vision all seem to be connected to one another. And all forms of nystagmus may be an equally-prominent symptom over time in vestibular migraine, even if it was not present upon initial diagnosis.4

Other symptom factors to consider 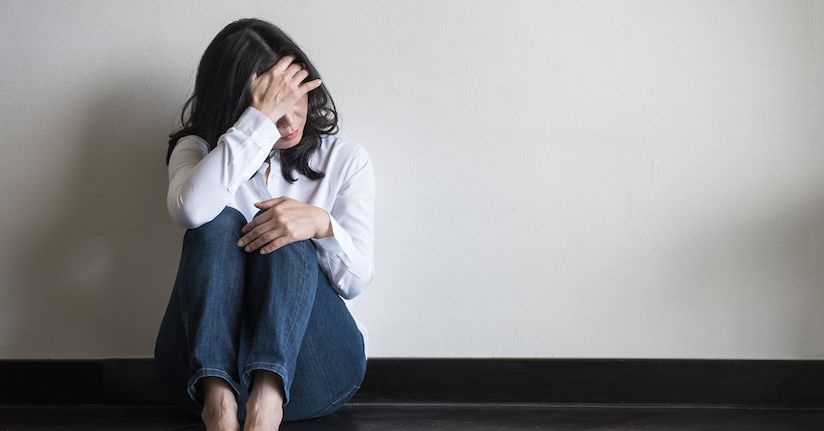 It is important to remember that vestibular migraine symptoms can vary for each person and may not even be consistent between attacks. While these issues regularly show for patients, they are not a guarantee; and there may be additional consequences not even described here. For instance, it is well established that emotional comorbidities (anxiety, stress, depression) are also frequent side effects.

Furthermore, as we mentioned, there is a clear delay between the development of migraine and the actual diagnosis of vestibular migraine. For some, this may be due to a lack of direct vestibular symptoms for several years, whereas for others it may simply be the result of having episodic vertigo or dizziness that is not immediately recognized as vestibular migraine. In addition, approximately one-third of patients evolve from semi-regular to chronic vestibular symptoms—further complicating its identification. Either way, there continues to be a need for better distinction between and diagnosis of migraine subtypes and vestibular syndromes.

Lastly, we want to emphasize: things can get better. As we noted, migraine generally diminishes with age, even if it does not fully disappear. There are also more and more effective treatments, both for migraine prevention (e.g. anti-CGRP medications) as well as symptom relief (e.g. tinted glasses for light sensitivity). Additional support resources and patient communities offer connection and advocacy opportunities. And researchers continue to investigate new and better ways to help patients all over the world.

What We Know about Vestibular Migraine and Light Sensitivity