ADHD (Attention Deficit Hyperactivity Disorder) is a neurodevelopmental condition that affects millions of children and often continues into adulthood. It’s a combination of persistent problems such as difficulty sustaining attention, hyperactivity and impulsive behavior. In this post, we explore how ADHD symptoms are also accompanied by hypersensitivity and sensory processing issues, which can include strong sensitivity to light and other external stimuli.

People with ADHD often display a strong aversion or reaction to various things, which can stem from an inherent personality characteristic ("hypersensitivity") or neurological disorder ("sensory processing disorder"). Although researchers have hypothesized that perhaps as much as 20% of the general population show traits of high sensitivity, ADHD individuals are at an even great risk, according to multiple clinical studies.1,2

An individual with ADHD hypersensitivity may also be called a highly sensitive person (HSP) and is thought to process certain emotional and/or physical stimuli more intensely or thoroughly than others; they also tend to notice more aspects of their environment. As a result, this can lead to overstimulation and other ADHD symptoms.3

Specifically, people with ADHD hypersensitivity can exhibit any of the following issues:

Similarly, sensory processing disorder is a biological explanation for these deficits and has been applied to a high percentage of ADHD patients—between 40-84% according to some researchers.4 Contrary to HSP or SPS, sensory processing disorder is a neurological condition that describes the brain’s incorrect processing of external "information" (e.g. light, sound). This then results in overstimulation, distress or even physiological symptoms. For instance, extended fluorescent light exposure could manifest as painful photophobia. 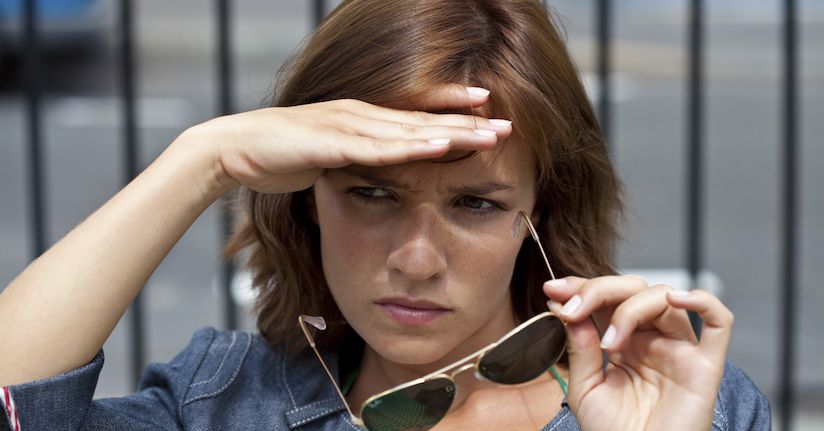 Not surprisingly, this extreme sensitivity displayed by ADHD patients often manifests with eye-related symptoms: reduced visual sharpness, myopia, impaired depth and color perception, among others. In addition, persons with ADHD also report strong sensitivity to bright light, known as photophobia. In fact, a 2014 study found that nearly 70% of individuals self-identified as photophobic—more than twice the number of people without ADHD symptoms.5

Those with ADHD who were also light-sensitive reported several related complications from light exposure too, such as:

They also wore sunglasses more frequently throughout the year, including indoors and on cloudy days.5 This is not an uncommon practice among light-sensitive persons as they try to block all light from causing them pain—but keep in mind that wearing dark eyewear inside on a regular basis can just make things worse. (If you are concerned, we encourage you to read more about dark adaption and what you can do about it here)

Although any type of light can trigger symptoms of ADHD, fluorescents have a trifecta of brightness, invisible flicker and high concentration of blue light that makes them so damaging. And these issues are often made worse for those with known ADHD-related sensory processing disorders or hypersensitivity.

More research is needed in this area, but a small 1976 study did show that classrooms with unshielded fluorescent lighting led to an increase in hyperactive behaviors (fidgeting, lack of attention) among ADHD children.6 Plus, there are countless patient anecdotes that describe similar phenomenon:

A few theories have emerged that link ADHD, hypersensitivity and photophobia.

The first concerns the systems in the eye and brain that produce the neurotransmitter dopamine and melatonin, a hormone that regulates sleep and wakefulness. Both are more likely to be inhibited in individuals with ADHD and hypersensitivity, and they may be further disrupted upon exposure to light.6

Additionally, people with the developmental disorder have more difficulties in processing blue light wavelengths—which is known to activate specific cells in the eye, cause episodes of photophobia, and may also signal disrupted sleep patterns and circadian rhythms that are frequent in ADHD persons.7

Related studies also indicate a likelihood that people with ADHD might have comorbid migraine and/or anxiety disorders, both of which are independently characterized by heightened sensitivity to light.8-10 Even worse,there is evidence that ADHD medications, such as methylphenidate (e.g. Ritalin), have been linked to photophobia as a possible side effect.11

So what can you do to reduce ADHD light sensitivity? Check out home remedies that might help by clicking the button below!

The Effects of Anxiety on Light Sensitivity