When it comes to migraine, light sensitivity, or other chronic conditions, the search for remedies can often lead to many questions about their true effectiveness. Tinted therapeutic glasses are no exception. Are they shown to be a reliable option for ongoing treatment? Have they been proven to provide relief for a majority of patients? Which tints are most effective in helping prevent light-triggered migraine attacks? Many of these questions can be answered, or at least better illuminated, by published medical research. Luckily, we have done the heavy lifting and summarized accessible data on the best tinted glasses for migraines and photophobia relief, and the answer was clear: FL-41 tint is simply better than the rest.

The most substantive and meaningful research in the area of tinted eyewear surrounds FL-41 tinted glasses. The FL-41 tint is designed to filter the most harmful wavelengths of light for individuals with migraine and photophobia, shown by research to be at and around 480 nm.1 Sunlight and fluorescent lighting are just two common sources that give off these dangerous wavelengths, thus carrying the potential to trigger or worsen an attack. Several studies have explored the effectiveness of this tint with results showing that they are the simply better at providing patients natural migraine relief as well as improve symptoms of photophobia, blepharospasm, and other light-sensitive conditions.

The first of these studies looked at a group of children who wore either FL-41 or generic blue-tinted eyewear for four months. Those who wore FL-41 experienced sustained relief in the overall frequency, duration and intensity of their migraine attacks; in fact, they had 74% fewer attacks overall.2 Another study compared the tint with gray colored lenses and found participants to have less sensitivity to overall light as well as fluorescent lighting with FL-41.3

An additional noteworthy advantage of FL-41 relates to the concept of “precision” tinting. Research has linked precision ophthalmic tints to reduced visual discomfort for patients who reported having migraine.4 FL-41—as a “precision” tint—does not simply block all light of a certain color. That type of tint creates lenses that are as dark as sunglasses, which can worsen light sensitivity in the long run when worn indoors. Instead, it is better to focus on filtering only the most harmful wavelengths. TheraSpecs are a premier example of precision-tinted lenses, and they have been independently shown to filter more light in the critical wavelengths around 480-500 nm while still being light enough to allow extensive use with no side effects. 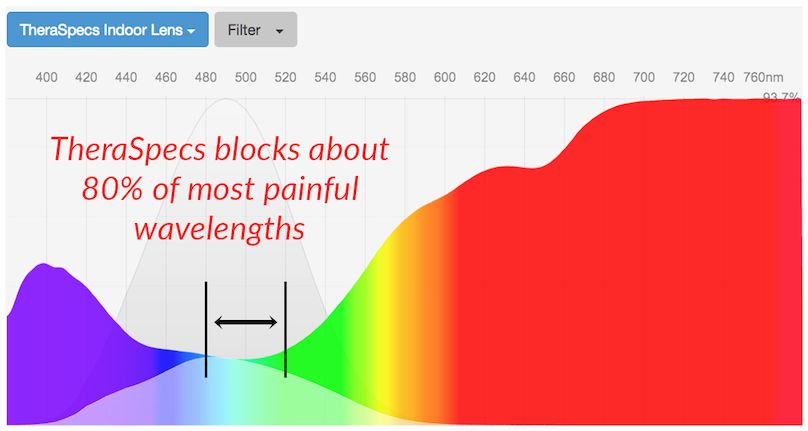 The supporting research on generic red-tinted lenses is less clear. Diana Mahoney, citing the findings of a study presented during the North American Primary Care Research Group annual meeting in 2005, discussed the benefits of red-tinted contact lenses, but there were some obvious limitations in the findings including: 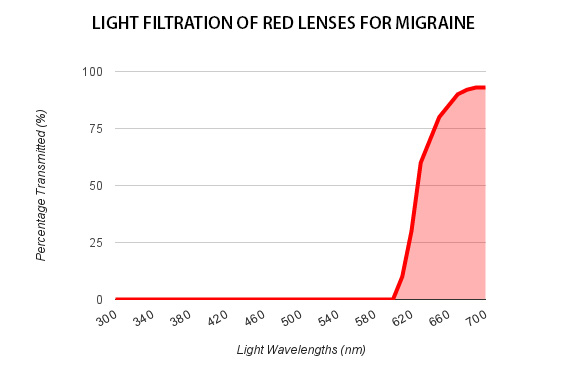 Furthermore, companies that claim their red-tinted glasses provide migraine relief often erroneously cite FL-41 research as well as broader clinical findings on blue light, which can be misleading for consumers wanting to know about their true efficacy. In fact, available light filtration spectrums show red lenses filter ALL light below 600 nm; although it is blocking the most harmful wavelengths for individuals with migraine according to research, this creates lenses that will appear excessively dark and can exacerbate light sensitivity if constantly worn indoors (also known as dark adaptation).

Amber and yellow lenses are also sometimes mentioned as therapeutic, but the research does not support the claims. The fact is these tints have not been studied for migraine; instead available research points to improved sleeping habits5 and increased melatonin6 production and release. Although melatonin has been linked to migraine, it is still unclear if amber or yellow-colored lenses would be an effective therapy for patients.

Additionally, you may often see these and other colors associated with “blue blocker” eyewear (yellow has been categorized under “gaming” or “computer” glasses as well), which more broadly references any lens color or coating that eliminates blue light. Again, there is no confirmed linkage to migraine relief and prevention, nor has there been any clinical standard set for exactly what wavelengths this eyewear should reduce and by what percentage in order to be effective. In fact, as a result of the large number of products that have adopted the blue blocker label—each of which has a different application and/or definition—the term itself is effectively rendered meaningless.

Finally, these products are often sold on the basis of general research on the negative effects of blue light toward sleep, eye strain, blepharospasm, photophobia, and other issues rather than research that demonstrates the efficacy of a particular “blue bocker” tint. So unless a company has published the filtering properties of its product(s), along with research that demonstrates that filter actually helps, a consumer cannot really trust claims of therapeutic efficacy.

One of the more recent studies to emerge explores the value of green light in migraine relief. Specifically, it showed that exposure to a narrow band of green exacerbated migraine symptoms and photophobia less than other wavelengths of light. In addition, green light helped improve head pain during attacks for a small number of patients. However, the study also validated that blue light continues to be most problematic for those with photophobia. In addition, a lens that only let through the narrow band of green light used in this study would be so dark as to be impractical to wear and would be sure to cause dark adaptation issues.

Lastly, there was reportedly a small scale study, completed in 2005, which examined whether a particular green lens reduced the severity of headaches for individuals with migraine and/or chronic daily headache. We have been unable to verify the originating publication for the research (Headache Care, Volume 2), and at minimum can confirm that the study has not since been replicated - all of which lead to questions about its validity. Furthermore, the lenses did not claim to filter what other studies have found to be the most harmful blue light (480 nm) nor offer a specific percentage of light filtration at its targeted wavelengths of 400-450 nm (blue) and 560-640 nm (red). Finally, researchers only studied relief during an attack, not whether these lenses prevented migraine attacks or reduced migraine frequency.

Based on all this published research, the best tint option for migraine and photophobia relief remains precision-tinted lenses—namely FL-41—that filter the critical 480-500nm wavelengths. Research has shown the tremendous benefits FL-41 tinted glasses for migraines have on reducing attack frequency and intensity as well as alleviating additional symptoms of eye strain, light sensitivity, and more. We’re proud to say that TheraSpecs are a leading option for 480nm precision-tinted eyewear, especially when you note that nearly 90% of our customers have found relief with them for their light-sensitive condition. If you’re interested in trying our migraine and photophobia glasses risk free for up to 60 days, you can purchase any of our styles through our online store: https://www.theraspecs.com/shop/.