One of the more popular developments in accessible online design has been dark mode. It can be especially attractive as an option for people with light sensitivity or photophobia because of its potential to ease their discomfort while using digital devices. But does it actually lower the risk for headaches, eye strain and other symptoms? We'll explain what dark mode is, where you can find it, and what research and users say about its effectiveness.

What is Dark Mode?

Dark mode—which can go by other names such as night mode or dark theme—changes the visual display of device screens, websites, or mobile applications for which it is enabled. It inverts the primary color scheme, swapping traditional dark-on-light colors for its counterpart: light text on a dark background.

While it has other purported benefits, dark mode in particular has caught fire over the past few years as an accessibility feature for those with visual impairments or sensitivities. For example, more than one-third of all Slack users who requested a dark theme cited underlying health concerns (such as photophobia or migraine attacks) as the reason for wanting it, according to Slack accessibility consultant George Zamfir on Twitter. This spurred the tech company’s product team to include it in a September 2019 platform update.

As users have been quick to adopt or request it, there has been a noticeable rise in the number of applications introducing dark mode for their platforms. Here are the most prominent brands that have made the feature available:

But saying that dark mode has therapeutic value for people with light sensitivity does not necessarily mean it is been successful in achieving that goal. Let's look closer at what the experts are saying.

In documentation for web developers, Google offered a very straightforward description of the value of its dark theme for personal health:

"[It] improves visibility for users with low vision and those who are sensitive to bright light [and] makes it easier for anyone to use a device in a low-light environment."

However, these benefits remain largely unproven, with clinical research specifically wrestling with inconsistent findings over the years.

A 2019 study discovered that dark mode (which some researchers label “negative display polarity”) reduces visual fatigue, thus potentially lowering the risk of other complications like irritated eyes and blurred vision, among other symptoms.1 The analysis also suggested that visual focus and device usability were improved with a dark theme in use. This contradicts earlier studies that show light mode as significantly more advantageous for younger and older adults, specifically leading to better visual performance. Under certain conditions, such as reduced ambient lighting and smaller text size, dark theme may be particularly uncomfortable. And researchers also found no difference in headaches or eye strain based on the display settings—at least indicating that physical symptoms may not improve with darkened displays.2

Among patients, it does appear there may be a more favorable sentiment toward dark mode. Our team analyzed hundreds of Twitter’s “Top Tweets” dating back to 2017 (n=232), in which dark mode or dark theme is specifically referenced, and we found that approximately 63% of users either: 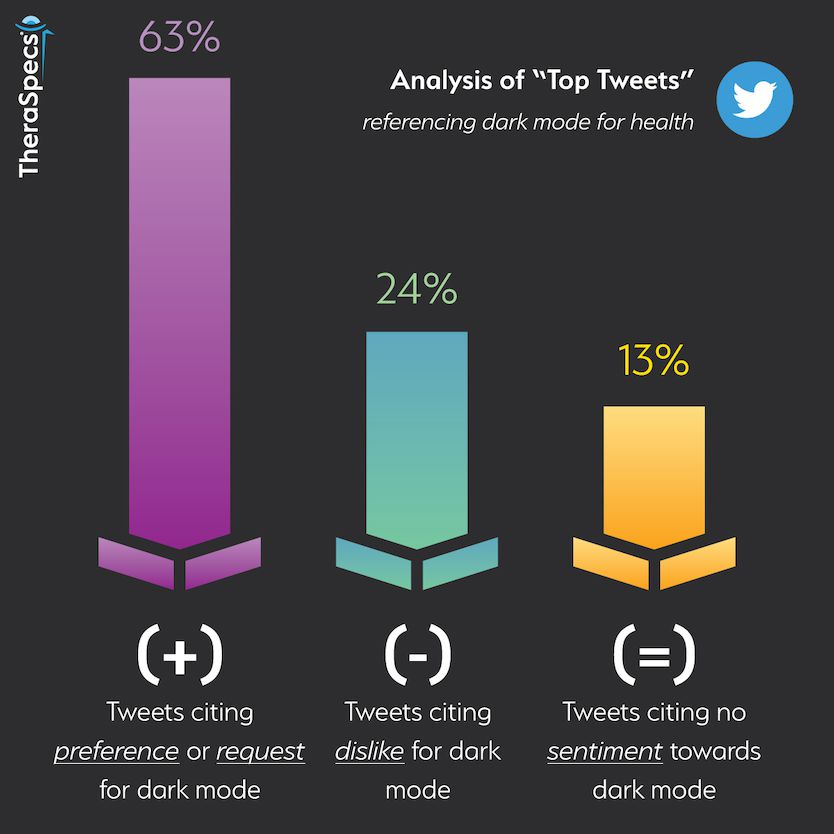 While that does not immediately signal that it will ease sensitivity to light or headache episodes across the board, it does show that under the right circumstances, it can be a positive feature for some patients.

As we like to say, "every brain is different," and that principle certainly seems to hold true in the case of dark mode and its supposed benefits for people with sensory issues. Each person responds differently to various therapies, even if they are widely considered to be helpful by the medical community. Plus, auxiliary factors can have a dramatic influence on the physiological outcomes with dark mode, several of which we describe below.

Inconsistent application of dark themes: Many with sensory sensitivities and even those without can be negatively affected by a poor application of dark or night mode within a specific app or website. In particular, stark contrast (such as bright white text on a pure black background) or overly-vibrant color schemes may instigate discomfort in some viewers.

Switching cost of dark to light mode: While dark mode is more ubiquitous today than even a few years ago, it still has not been widely-adopted across the web. This can be especially frustrating for viewers as they might encounter non-accessible displays after utilizing an application in dark mode. This harsh visual change can potentially bring about symptoms for sensitive individuals, and it may be even worse the more accustomed to darker visual settings you become.

Light sensitivity usually requires a toolkit: For most people with light-sensitive conditions, a comprehensive toolkit of lifestyle modifications, medications and relief products is necessary to reduce pain. Dark mode is likely to only be one piece of the puzzle. For example, even among people who regularly use and prefer these inverted display settings, 92% find as good or better relief with TheraSpecs light-filtering glasses, according to a recent survey we conducted.4

Dark mode does not necessarily equal more screen time: In that same survey, which explored the impact of increasing screen time during the COVID-19 pandemic, nearly two-thirds of people experienced physiological side effects that they directly attributed to their rising screen use.4 Even with less discomfort associated with dark themes, more exposure to screen light overall (including blue light), might at best cancel out those benefits. This is why continuing to take regular screen breaks and exploring other mitigation steps are integral to screen use strategies.

Should You Try Dark Mode for Light Sensitivity?

iPhone users can easily switch between light mode and dark mode on iOS. Learn how to change to dark mode on other popular apps (via PC Mag)

Here’s the big question: should you try dark mode to make using your devices more comfortable? The anecdotal evidence from patients suggests that it can be helpful for their headaches, migraines and photophobia, and so it may be worth testing out to see how it affects your neurological symptoms. And keep in mind that each website or mobile app can display these themes differently, so what may be effective in one scenario may not be in another.

Of course, you always want to respect the guidance of your doctors, but you also want to listen to your body as well. If you feel any pain or symptoms while using dark mode, it may be best to return to the default screen settings. And you still want to abide by good screen use practices, such as wearing TheraSpecs, regularly resting your eyes and utilizing other accessibility features. In combination, they can be a highly effective approach at easing screen-related discomfort.