There’s no better way to illustrate how helpful TheraSpecs can be for relieving pain, eye strain, and fatigue while working on the computer or looking at screens than to hear directly from people with firsthand experience. So naturally, we went straight to the source. In addition to quantifying the relief of TheraSpecs customers, we also highlight some of our favorite stories from people who have been able to use their devices more comfortably thanks to TheraSpecs.

What Customers Are Telling Us about Their Relief

We recently conducted an email survey of TheraSpecs customers1 about their screen time, and we are so excited to share the results! While many respondents had previously identified as enjoying relief with our glasses for a diagnosed neurological condition, they told us that indoor TheraSpecs were particularly beneficial for screens. An astounding 94% of those that tried at least one other remedy for their screen sensitivities—such as blue-light filtering applications or dark/night mode—rated TheraSpecs among the best or better than anything else they tried.

However, we didn't stop there. We analyzed thousands of post-purchase reviews2 that every TheraSpecs customer has the opportunity to complete, and the benefits of our glasses for screen use were equally prominent. In fact, more than 80% of customers who cited their use of TheraSpecs for computers, smartphone devices or other screens would enthusiastically recommend them to others for the same purpose—and after just three weeks of regular use. 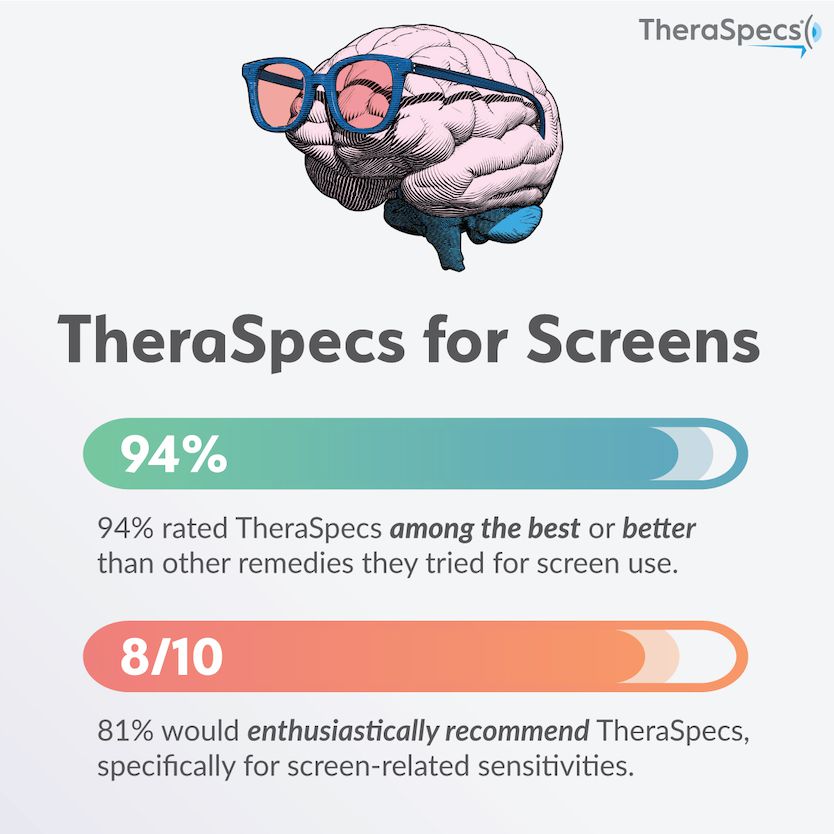 Now, let's take a look at what specific customers had to say about the effectiveness of TheraSpecs.

Screen time can be migraine-free with TheraSpecs

People with migraine often notice a worsening of symptoms from screen use during an attack and many report screen time as a migraine trigger. There’s scant medical research on this topic, but our survey of people with light sensitivity showed that 85% believe LED and LCD screens are a major player in the frequency and severity of their migraine attacks. 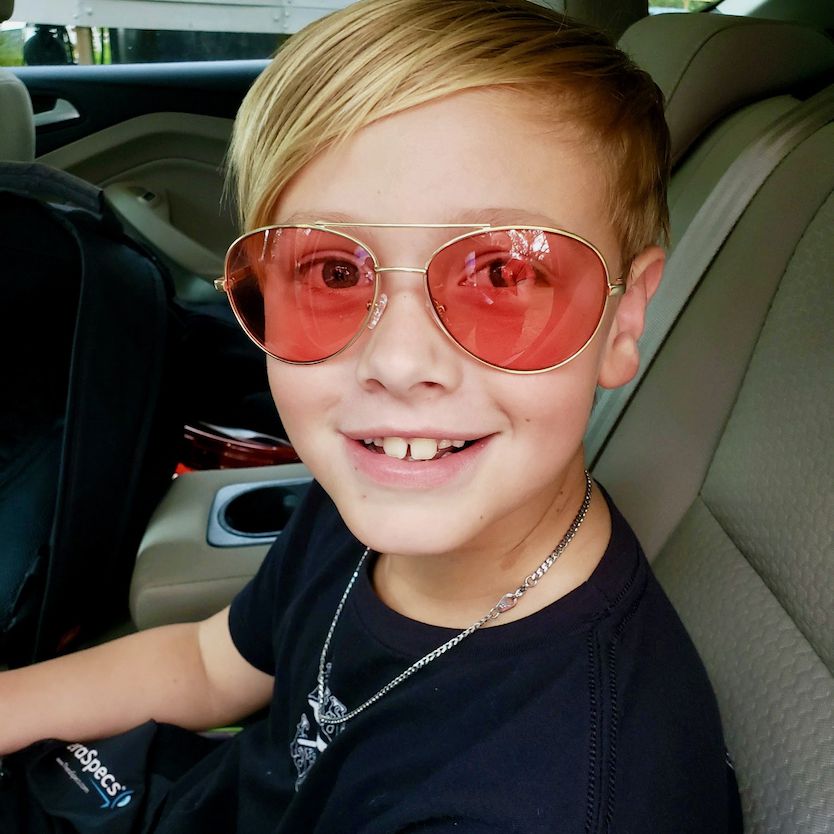 With TheraSpecs, Jen B.’s son can be migraine-free when he uses screens:
“Here is a photo of my son wearing your amazing product. As long as he wears them during screen time he doesn't get excruciating migraines.”

Working on a tablet or computer is painless for Shari W. when she’s wearing her TheraSpecs:
“Since I started wearing TheraSpecs to work on my iPad and computer I have not had one migraine.”

Spending eight hours a day at the computer is no longer a migraine trigger for Ruth M.:
“I have been using my TheraSpecs for about three weeks and my migraines have decreased substantially. I work on a computer 8 hours a day and before TheraSpecs, the computer would trigger a headache within the first hour of working. Now with TheraSpecs I finish each workday virtually headache free.”

Relief from eye strain, eye pain, and other visual symptoms from screen time

Eye strain, visual fatigue and pain, and blurry vision are just a handful of symptoms that can result from screen use.3 Researchers estimate that up to 90% of people have visual symptoms after prolonged computer use.4 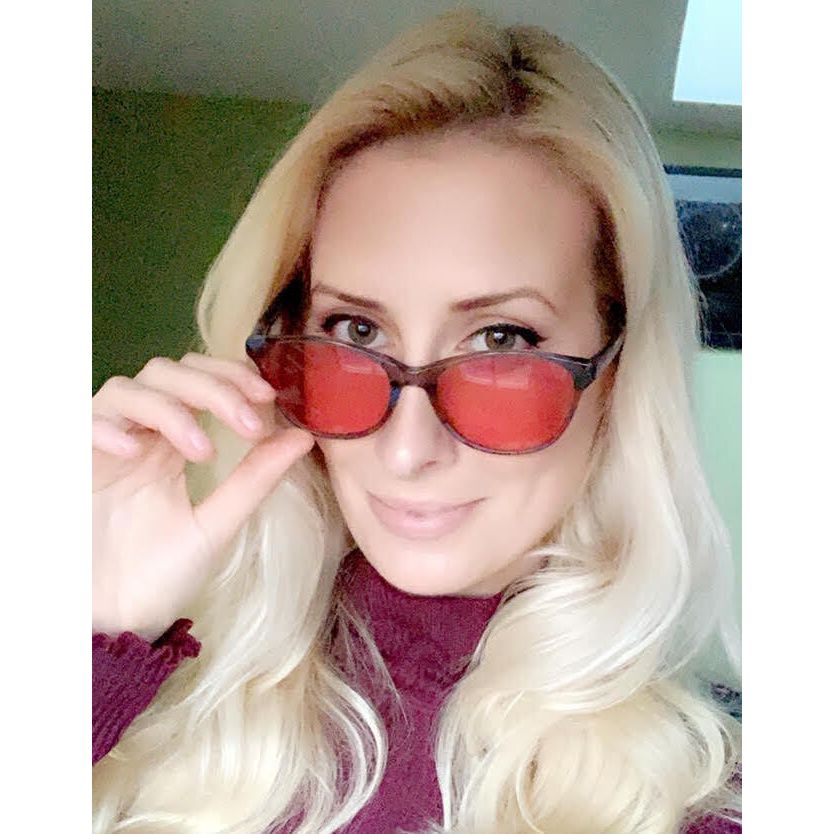 After living with eye pain and light sensitivity for years, Juliette O. finally found relief with TheraSpecs and now she’s headed to medical school: “It wasn’t until I began working as a medical scribe last month, staring at the computer for 8 hours straight, that I saw the affect blue light from screens has on me. Headaches, squinting, bloodshot eyes, lethargy, and inability to focus or think straight… I realized I couldn’t continue this job if I felt this horrible afterwards. I immediately jumped on the computer and researched your glasses. They arrived quickly and I was able to wear them to my next work day. They’ve completely changed the way I feel at the computer, and I’ve had so much more energy and much less stress throughout the entire day. My symptoms are gone. I always have them on me, even when using my phone, such as now. Thank you guys, you’ve changed my life.”

Angela B. is free from eye pain as long as she wears her TheraSpecs when looking at screens:
“I began wearing TheraSpecs watching television and when on my computer. The pain started to disappear and now I am free of the pain. If I forget to put them on and watch a very bright screen, my eyes begin to hurt again.”

For James L., having his screen becoming clearer and easier to read with TheraSpecs was “rather magical”:
“I was having rather serious vision issues, most likely from the amount of screen time. The glasses were rather magical for me, the minute I put them on, things on the screen looked clearer and much easier to read.”

No longer cringing at screens

Screens are exceptionally high in blue light at 480 nm, the wavelength of light research has found to be most problematic for people who are sensitive to light.5 TheraSpecs block as much as 25 times more light at 480 nm than other glasses marketed as blue light-glasses.6 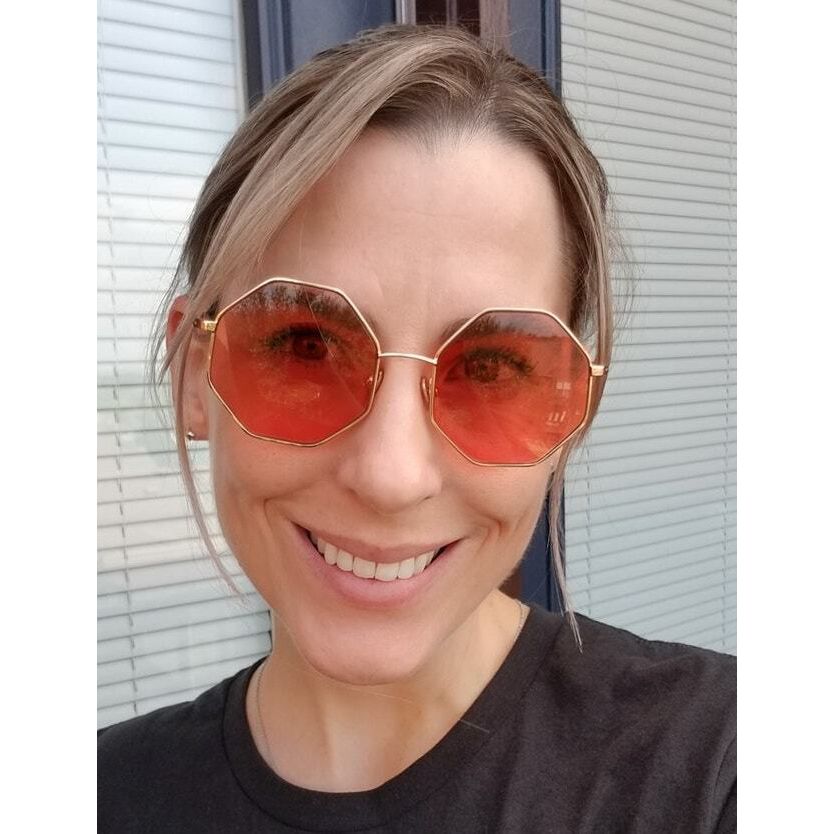 Rachel M. has been a customer for six years and she loves TheraSpecs for the relief they give her while working on the computer:
“I work full time on the computer and TheraSpecs are the only way I can look at a computer screen for 8 hours.”

She was so accustomed to discomfort from screens that Lisa F. didn't even realize how much they bothered her until she tried TheraSpecs:
“I've been wearing the TheraSpecs for several weeks now while on the computer, using my phone, and under the fluorescent light in my kitchen. I knew that I was cringing away from the computer screen at times, but didn't realize how bad it was until I started using the glasses and I finally felt some relief from the painful brightness.”

Pamela H. finds TheraSpecs so effective that they’re a constant companion when she’s on the computer:
“I'm wearing them now! Use them at the computer almost constantly. Just the best purchase!!!”

Relief from post-concussion seizures and migraine attacks triggered by screens 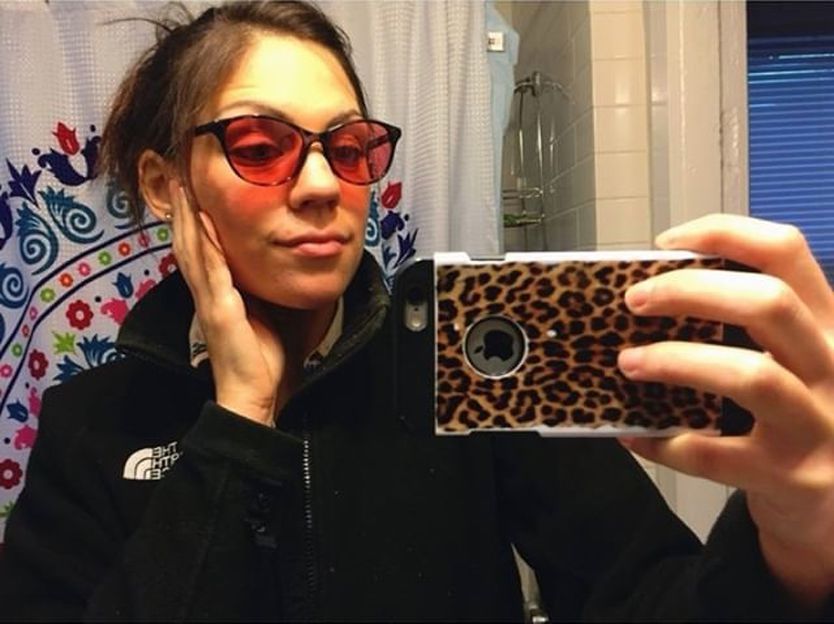 Following a severe concussion, screens triggered migraine attacks for Kristina until she found TheraSpecs:
“I’ve been suffering from migraines since my severe concussion in October 2017. I thought this pain would absolutely never go away until I found relief with TheraSpecs. I will not look at a computer screen without them!”

Seizures and migraine attacks triggered by screens were common for Russ W. until he began wearing TheraSpecs:
“I had a car accident 3 years ago and suffered a severe concussion (TBI) along with several other injuries. The TBI has caused severe migraines, light sensitivity, and seizures. Over the past 3 years I have tried many different types of glasses and tints with little to no help. I could not work on a computer without getting severe migraines or having seizures. I am wearing the indoor [TheraSpecs] glasses now and am able to write this e-mail, which is something i have not been able to do for some time. I feel like I have my life back and now have some hope again.” 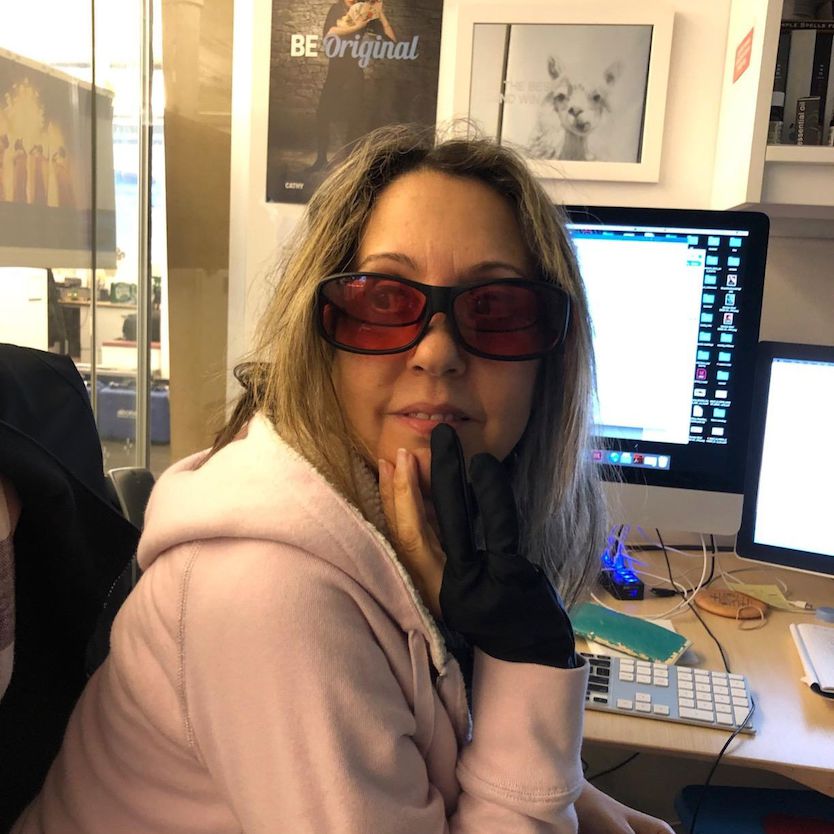 Computer screens caused such severe dizziness for Cathy F. that she couldn’t work until she tried TheraSpecs:
“These glasses were a miracle for me. My job is on the computer all day and it’s light was triggering dizziness so bad I couldn’t work. I was devastated. I researched and found these glasses... I noticed after wearing them the first day I was able to stay on the computer a little longer. Then each day, it got better and better. I am finally able to go through a full day on the computer. I wear them at work over my own glasses. And I watch tv with them. Most of the time I forget I have them on. They have been a lifesaver. Worth every penny.”

Here's Why Smartphones Can Hurt Our Eyes and Cause Headaches

12 Smartphone Hacks to Stay Headache and Migraine Free on Mobile